This is a follow-up question of QED symbol after statements without proof, and I am really not sure whether this is the right approach to solve the problem raised there. But it seems to solve all situations I encounter perfectly, so I will try...

Here is what I currently need to do:

and I want to avoid adding the \begin{proof}[\unskip\nopunct] and the \end{proof} myself, but get this automatically using a double star in both situations.

It might actually be better to interchange the order of the proof and the theorem environment, so a solution that provides that version would also be appreciated!

Is this (or the ** replaced with something else, independent of using theorem or lemma or proposition) possible?

Maybe this solves your problem. I define a \varnewtheorem command with the same syntax as \newtheorem, but that creates four variants for each label we call. So with \varnewtheorem{foo}{Foo} we create the four environments

The syntax accepts the optional arguments as usual. 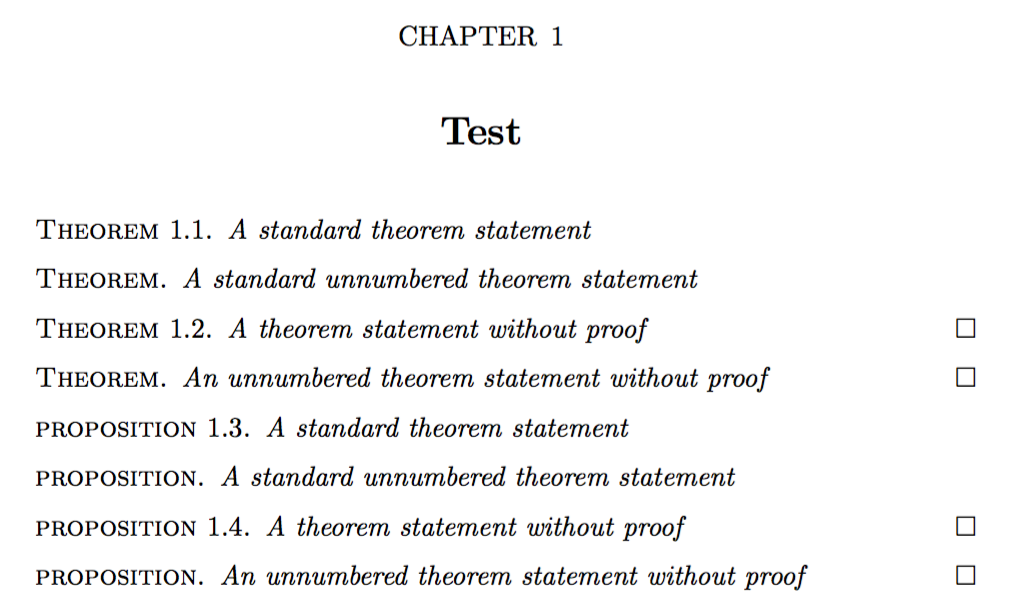 For each \newtheorem{X}, you can call the below function \doublestarenv{X} to create an X** environment:

You can automate this process by updating \newtheorem to automatically execute \doublestarenv:

Not the answer you're looking for? Browse other questions tagged environments amsthm starred-version newtheorem or ask your own question.

4
QED symbol after statements without proof

24
Graph of dependencies from LaTeX file
12
Change only the ending with renewenvironment
18
\qed or \qedhere at the end of split environment
2
Prevent environments from breaking in two pages
6
How to change QED sign for theorem classes
2
numbering different theorem names with thmtools
3
\newtheorem with qed-symbol
5
customization of theorem, lemma, definition, … in ieeeconf
0
Error caused by \ifthenelse within \newenvironment