Save and restore the makeatletter/makeatother state

When posting snippets of latex code that define or modify commands containing @, one commonly includes the \makeatletter...\makeatother wrapper that's necessary if pasting the snippet into an ordinary document. However, such pasting then has bad effects if it happens to occur somewhere that \makeatletter is already in effect. Is there a good way to "save the state of 'at'", execute some code, and then restore the original state, whatever it might have been?

(Yes, I know that \makeatletter/\makeatother are local to groups. However, certain code doesn't work the same way inside a group, e.g. macro definitions are local to the group by default, so it would be better to avoid having to enclose the whole snippet in a group.)

The argument of \@firstofone will be read and tokenized within a local scope where @ is of category-code 11(letter) and where therefore @ either can be part of the name of control-word-tokens or will be tokenized as an explicit character-token of category-code 11(letter).
When processing/carrying out/running/executing those tokens that came into being due to reading and tokenizing the argument of \@firstofone takes place, the first \endgroup will terminate that local scope, resetting the category code of @ to whatever it was before calling \makeatletter.
Thus processing/carrying out/running/executing the remaining tokens of \@firstofone's argument does not take place within that local scope where the category-code of @ is changed but with the category-code-régime that was in effect before processing the \makeatletter-token.

You could define a new macro to store the current catcode of @ and restore it using this macro later on:

As you can see in the output, \makeatother incorrectly restores the catcode in the first part, while \safemakeatother doesn't: 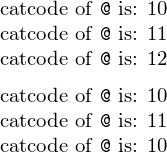 Not the answer you're looking for? Browse other questions tagged macros catcodes or ask your own question.

103
Why should the minimal class be avoided?
2
How to fix minted and listings hyphen alignment on my list of codes?
0
\xpatch fails if \PassOptionsToPackage{french}{babel} is used
0
How to replace a command argument as #2 with something else?