I have the following latex script:

The output of my code is the following: 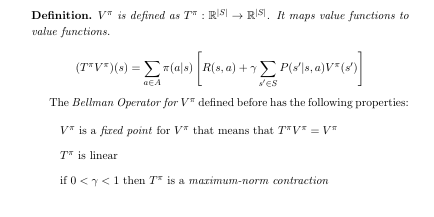 My question is why from "The Bellman Operator ..." is all shifted on the right? Seems it is part of the definition, which is unwanted. How can I fix this?

Your code may be improved in several ways, listed here in no particular order:

The phrase “Bellman Operator” is part of the definition! It must appear in it, but earlier.

You may not want the line \theoremstyle{definition} before defining the definition environment; in this case the text will be italicized, except for the argument of \emph which would be in upright type. Usually definitions are typeset in upright type and only the defined term is in italics.

If you feel that \mid leaves too wide a space around the |, at least use \,|\, (and better define a macro).

By the way, I can't make sense of such a definition; please, check the part $V^{\pi}$ is a \emph{fixed point} for $V^{\pi}$, because it doesn't seem to mean anything sensible.

This is paragraph indentation. Just remove the blank line between \end{BellOpV} and The \emph{Bellman Operator for $V^{\pi}$}....

I solved in the following way: