How to create a graph with nodes as custom images?

I want to create a graph where I will be able to write some stuff on top of the nodes, and additionally make some of the anchors bold. And I want the nodes to be custom images that I will provide, and not regular circles.

I had this code:

But what this code does is that the root node is displayed somewhere completely else in the document, the left_child and right_child are displayed correctly but the arrow that comes from root goes until the middle of the image, and lastly final node is not displayed as child of left_child but is displayed as child of root node. Any idea how build graphs with nodes as custom images and have the functionality such as to be able to write on top of some nodes or make some arrows bold?

I'm not sure, if I understand you correctly: 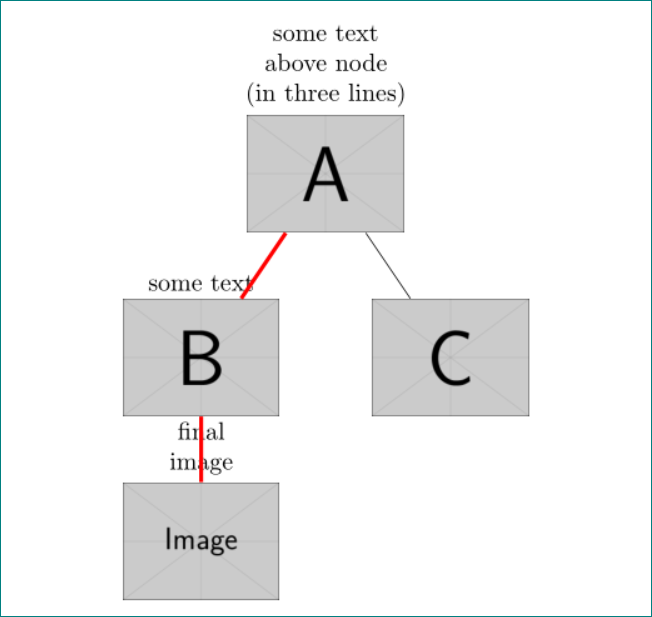 Not the answer you're looking for? Browse other questions tagged tikz-pgf graphics tikz-arrows graphs or ask your own question.

7
Aligning TikZ trees with other nodes
1
Tikz, childs not exactly on the same level
5
TikZ: Re-arranging the hierarchical diagram
2
Draw Tikz Tree where level distance between multi-line nodes is constant
12
Drawing rectilinear curves in Tikz, aka an Etch-a-Sketch drawing
9
Line up nested tikz enviroments or how to get rid of them
1
Tikz: Curly brace incorrectly positioned
5
Drawing loops and borders in TikZ
5
How to color tikz mindmap nodes by y-coordinate