\ex in gb4e package: how to force example without line feed

And the exe environment is producing

Aslo for items in the xlist it would be nice to put the next to each other, so (1) a) Blaa. b) blla.

I was not able to find how it is possible. Nothing seems to work for me. Does anyone have a solution?

I removed other packages. I thought there should be a way to adjust it. I do not know any alternative that would allow for what I need.

For putting sets of examples side by side you can use the multicol package. The downside of this is that it numbers the examples in a way that you might not like. This is how the package works, so there is no good way around it. For a better method, see the following question:

For inline examples, here is a way to do this using enumitem to create the inline list but using the example counter from gb4e. It only works for the top level numbering (i.e., you can't have sublists inside inline examples.) It also won't support glossed examples (for obvious reasons.) I don't really think this is a good way of doing examples, in all honesty. 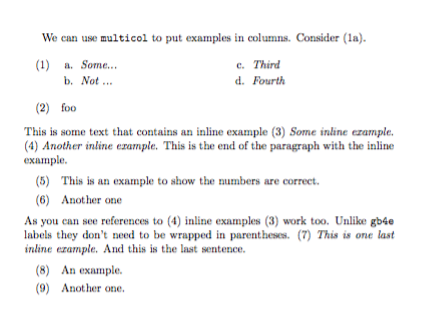 Not the answer you're looking for? Browse other questions tagged spacing numbering lists linguistics gb4e or ask your own question.