I'm autogenerating a book using pandoc, meaning pandoc parses markdown-formatted text and runs it through xelatex with it's own template. I have a problem where I need to have a short text after the chapter title in one column before starting the two-column main text. Because of pandoc-induced limitations, I can't use multicol. Instead the document is a twocolumn-memoir.

Currently, I use minipage to set the text after the chapter heading, but I am having a problem where the second column is overlapping the minipage instead of starting after the minipage like the first column.

A suggested solution requires defining the first paragraph before the chapter heading, which messes up how pandoc handles the text. Is there a way to fix the problem some other way? The solution doesn't need to use minipage, but pandoc limits some options because of how it parses text.

A minimal example of how I currently generate the text:

You can use the strip environment, from cuted (sttools bundle). The envirronment inserts at the beginning and end a vertical spacing of \stripsep (default: 15pt±2pt): 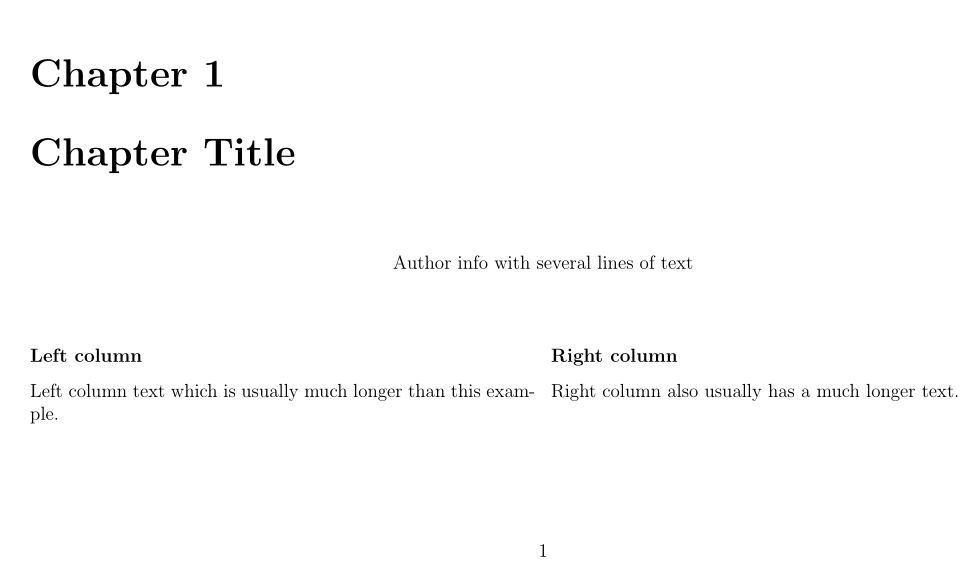 7
One column text under chapter title in memoir twocolumn mode?

6
How to define, once and for all, the size of the area (for an epigraph following a chapter)?
5
Hyperref chapter link anchors in two column mode
1
Image and wrapped text over two columns
2
allow minipage to column break but not pagebreak
1
How to have chapter title on its own page in a twocolumn document (KOMA class scrbook)?
1
Create a page (text) wide text box in twocolumn document
3
Inserting a one-column multi-page table in a two-column document
0
Footnote missing but not footnotemark memoir twocolumn mixed with onecolumn