Which TeX editors are able to compile just a snippet of a .tex file?

More precisely, I'm looking for pure TeX editors solutions that let the user select a region of a .tex file and compile just this region from the current .tex file (with its class, packages, personal macros, more generally its preamble). Just the names of such editors would be nice, how it is done would be the icing on the cake.

Amazingly enough, TeXShop does in fact have such a facility. The problem is that long-time users of it like myself are probably unaware of it.

It can be found under the Edit Menu -> Experiment

This menu will open a window which you can copy a snippet of the currently open document. When you press the Typeset button on the window, it will show the result in a small preview window: 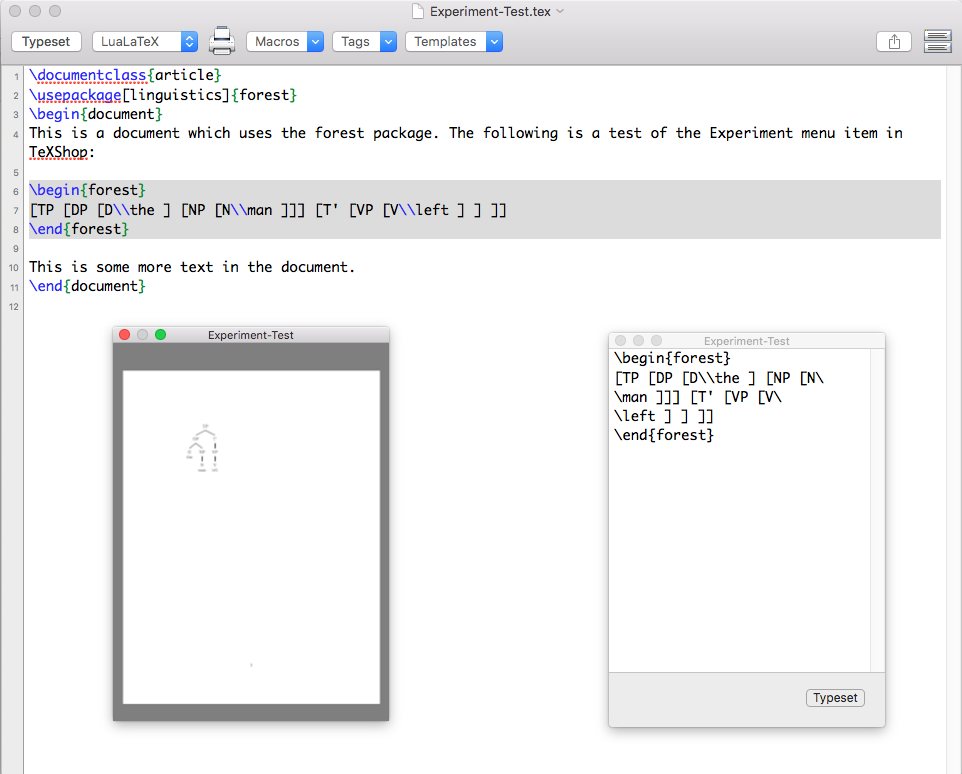 With Emacs and AUCTeX, it is as simple as highlighting the portion of the text you want to compile and then hitting C-c C-r (or M-x TeX-command-region).

The command tries to be 'smart' about it, so if you do C-c C-r RET C-c C-r RET (i.e., run the same command on the same section twice) it will first compile, then, second, open a viewer for resultant PDF. (By default, called _region_.pdf).

In order to selection the region, the easiest way is to move the cursor to the start (or end) or the desired region, hit C-SPC (or M-x set-mark-command) to set the mark, then move it to the end (or start) of the region. Then hit C-c C-r RET to compile that selection.

Note that this also creates a file called _region_.tex.

This would create the following file and run (in this case) pdflatex on it:

Doing C-r RET again will open a viewer of _region_.pdf Of course, you could also compile the _region_.tex file from the shell, etc.

Note: if you mark a new region, it will do the same thing all over again, but use the same _region_ base filename.

Note As giordano notes, starting with version 11.89 of AUCTeX, it is now possible to compile a single section (not necessarily a single '\section') of your file. From the manual:

In essence, what AUCTeX does is the same as in my example above. The advantage is that you don't need to explicitly mark a portion of text that you want to compile.

Kile has this feature. It is called QuickPreview. I've never used it before, but I tested it in a minimal example and it seems to work.

I tested with my answer to another question:

Highlighting the contents of the document environment (but not the environment itself or the preamble) and choosing Build > QuickPreview > Selection typeset the selection.

As far as I can ascertain, the way this works is that Kile tries to identify the preamble by looking for the first line containing \documentclass for the start of the preamble and the \begin{document} line to figure out where the preamble ends. It copies the preamble to a file in a temporary directory called preview.tex, along with the selection, wrapped in a document environment. It then typesets this document and displays the result, if successful.

I tested the QuickPreview > Selection option. Other QuickPreview options include Environment, Subdocument and Maths group.

907
LaTeX Editors/IDEs
10
Getting a live preview of TeX (on Windows) - for just a small snippet of code?

33
How can I compile different .tex file on click on typeset in TeXShop? (MacTeX 2011)
155
When and why should I use % !TEX TS-program and % !TEX encoding?
7
How to show a filename above a code snippet just like on the arch wiki?
4
Weird tikz / gnuplot / TeXShop issue