Why pdf file cannot be reproduced?

I'm striking with an interesting problem. I created a pdf file long time ago. It can be downloaded here. Now just to recall how it was generated I decided to repeat the process and compare pdf files. I'm getting close, but I can't make the old and new pdf files look the same. I remember that I did everything in a usual way, I just changed the margins.

Why the pdf file can't be reproduced?

This is the process to generate new pdf file:

1) Get the latest cweb sources from ftp://ftp.cs.stanford.edu/pub/cweb/cweb-3.64ah.tgz

2) In cwebmac.tex change {NOS} fith to {NOS} fitb manually or with this command

3) Add the following to the end of cwebmac.tex

7) Now we compare old pdf with new pdf. For this we must uncompress objects in pdf files.

Also, some hyphenation is changed. For example, the following is different in old and new pdf files:

? But, more importantly, why it is different? What this pdf code means, anyway?

This is the link to download the diff file: https://www.dropbox.com/s/lvbijcn2689cuye/cweave.diff?dl=1

passing mathematical details and barring mathematical oversight in my quick investigation it is necessary and sufficient that the rounding of <foo> to an entire multiple f/65536 of 1/65536 gives an f which is multiple of 127.

Then and only then is there some <bar> in which gives exactly the same TeX dimension. And the rounding of <bar> to an integral multiple g/65536 of 1/65536 will be with g a multiple of 50. And vice versa.

In fact, for TeX we have exactly

It has been clarified below and in comments that the cause of the difference was in the fact that you used formerly in as dimension units, and in your reconstruction attempt were using rather cm. Further, it is not exactly the same to make the difference between two dimensions originally expressed in in and to specify directly the result in in's because 1in is not an integral number of sp, the smallest unit used by TeX.

clarification to be very precise TeX applies this routine not to the integer x=65536 n + f, but to the (half-word) integer n, and the routine above also returns the "remainder" v mod 100, which is then appropriately combined with f and the scale 7227/100, so that almost up to the end data is maintained in shape (N, F) representing N + F/65536 where the exact F has been truncated to an integer; and at the very last step the attach_fraction sub-routine puts y = 65536*N+F into the register. But this final integer y is exactly as if the procedure above had been applied to x = 65536 n +f. Which would not be possible directly due to arithmetic overflows.

We can sum up the whole thing into:

You will find all these values below.

were you using cm as dimension unit back then ?

edit I think you were using 0.6in. See at bottom.

there is a (surprising to me currently because I have completely forgotten the details of TeX input process for dimensions at this stage) sensibility to using cm as dimension unit. 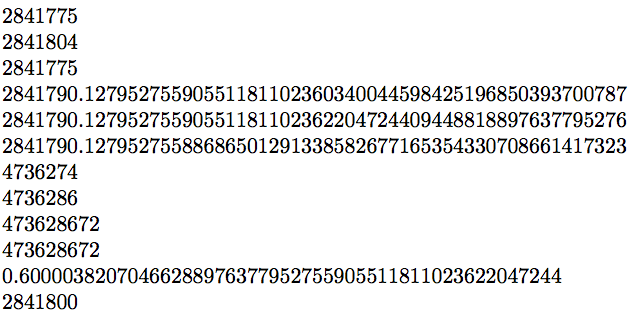 Not the answer you're looking for? Browse other questions tagged pdftex pdf or ask your own question.

237
What are the various units (ex, em, in, pt, bp, dd, pc) expressed in mm?
21
How can I compare two (not necessarily integer) variables?
18
What value TeX uses as its minimal unit
4
How to prevent loss of precision for operations on length values?
7
Exact Fraction of a length
4
latex pgfmath precision
2
How TeX does its scale factor calculation?

19
What version of PDF to use with pdfTeX
5
Is pdftex 1.40.13 outputting malformed pdfs?
23
Cannot copy text from the simplest PDF file?
2
cannot search in created PDF-File
0
No log file in Texmaker after Miktex last update (2.9.6615 version)
0
I cannot generated pdf using set of pdfs attached