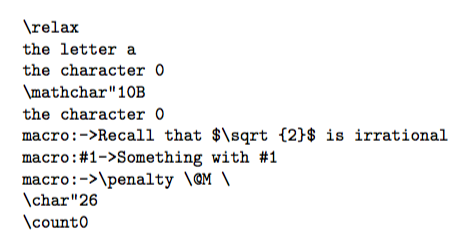 9
TeX doesn't recognize built-in control sequences?
0
How to parse a macro that contains a \let?
8
Why in the discussion of the definition of \newif are the following things true
27
What is a "Control Sequence"?
8
Macro overloading, catcode redefining… or how can I parse XML with TeX?
6
Redefine macro without using tmp variable
6
Why can I not use \string to prevent the expansion of \csname?
8
Using control sequence names to efficiently store a large amount of characters
7
Which tokens does TeX not use as undelimited arguments (unless between { and } )?
4
Accessing TeX's internal tokens