What are good packages for laying out a play?

I'm formatting a play as a LaTeX book. Is there any particular package the is best for laying out books like this (aside from the LaTeX-book class)?

I'm wondering if there are any examples of vignettes of the dramatist package? I've searched widely to find more examples of working LaTeX for this purpose to no avail. The example that I copied from a TUGboat article (TUGboat, Volume 25 (2004), No. 2) is as follows:

However, the \Character definitons do not appear to work as I can only compile successfully when I comment out any character related macros within the {drama} section.

I am not familiar with play-writing, so this is merely a technical note.

The TUGboat article you mention was written in 2004 by the dramatist package author, while the most recent version of the package is dated 2005. As such, there seems to have been some modifications made to the code causing the example to not compile. For the example to compile properly, \Character should be used as

with the first argument being optional rather than mandatory. 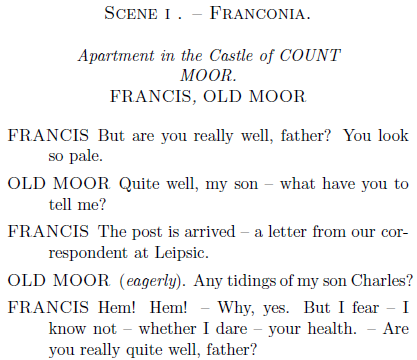 The optional argument is retrieved using \persona@<Roman> where <Roman> denotes a capitalized Roman numeral, sequentially numbered as they are defined. As such

The above mechanism is implemented to some extent when using \dodramperlist, which prints the persona list of the play (should be used within the drama environment).

The following style and class files could be useful: play.sty, dramatist.sty, screenplay.cls. I've never used them, though, so I have no idea how featured or usable they are.

There aren't really a lot of things that need to be included in such a package. The ones I can think of right now are

Since this, along with stuff already built into LaTeX, will do just fine, it shouldn't be too hard to roll your own package.

124
What graphics packages are there for creating graphics in LaTeX documents?
8
What LaTeX packages are available for ISO quality system documentation?
38
Find out which packages are used
10
What are good packages / techniques for writing more readable LaTeX *code*?
3
What packages help with typesetting settings specific to religious books?
3
What packages are included with MacTex?
0
What are some good templates for books that are similar to dictionaries?
1
What packages I need to add this style to my books?