Alignment in \oneof from the phonrule package

This question piggybacks off of the question/answer here, where one answer mentions how to create a phonological rule using the phonrule package.

You can see that output and environments are centered. Is there any way to un-center them and/or left-align them? The centering that it does appears to be an intentional addition in v1.2.0 of phonrule. But there is nothing else in the documentation regarding alignment.

Trying to throw in any type of alignment generally breaks the phonrule environment and it won't compile or it aligns the entire figure/example, rather than just the individual (output + environment) sections.

I have been using roughly the same as the other answer from the above question which utilizes \mbox. This is fine, but adding additional outputs and environments is either messy or requires a new command based on the differences. phonrule generally does all this in a much cleaner and more expandable way, which is why I'm looking into being able to modify the alignment.

Here's a complete reimplementation of phonrule:

In the code above I used all three possibilities; the first example is what you're looking for, the second one just has left alignment, the final one is like the original. 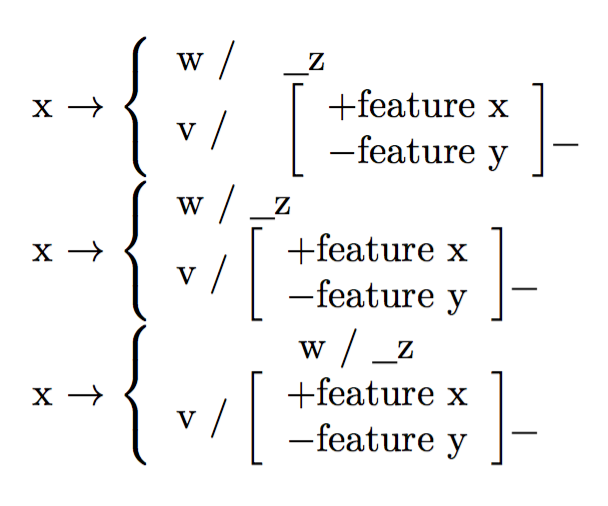 Define a new command \oneofl by adding the line

to your preamble (i.e., between \documentclass and \begin{document}) and use it instead of \oneof. Then you get the following output by the code below.

Not the answer you're looking for? Browse other questions tagged horizontal-alignment linguistics or ask your own question.