Operate on all strings in any math environment

I want to create an environment that will search through all of the math in it, to make some changes. So, I want something like a way to apply \regex_extract_all to search through everything which is in math mode in my environment.

I'm leaning towards using latex3, however I'm also considering luatex if that would be considerably easier. In that case, something like Automatically colourize all occurrences of certain strings (different colouring for different sets of words) is similar to what I want, however I want to apply it only within math mode, rather than to the whole document.

I've looked into applying commands to math mode, and it's been looking like I could perhaps use a combination of \regex_extract_all and \everymath however I'm worried about how it would work with other math environments like align equation or even just display mode. These questions:

\everymath, AMS equations, beamer, and tikz not working together

How to color certain commands/environments?

seem to indicate that it's non-trivial to operate on all math-mode text, and they both seem to use workarounds that might not work universally? I'm not sure. Would using \everymath, \everydisplay work for this case?

As a minimal example, if I were trying to make every occurrence of i as a variable red I'd want this code

Solving the problem in full generality is something I wouldn't try.

Here's the solution for making i variables red. 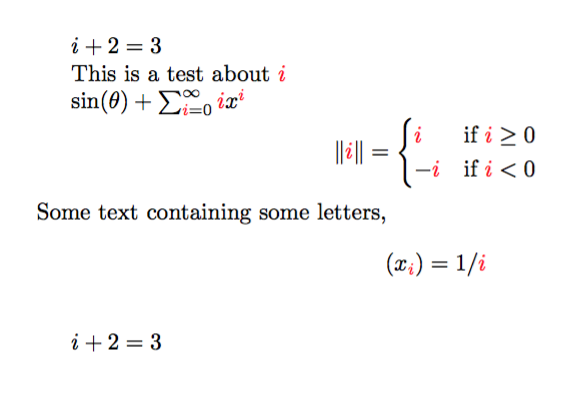 Not the answer you're looking for? Browse other questions tagged math-mode macros or ask your own question.

8
\everymath, AMS equations, beamer, and tikz not working together
6
How to color certain commands/environments?
4
Automatically colourize all occurrences of certain strings (different colouring for different sets of words)

4
Smaller matrices (or other math elements) in displayed math
32
Is there an easy way to add hover text to all incidents of math mode where the hover text would contain the LaTeX code?
21
\newcommand gives errors in math mode (with or without arguments)
3
Correct usage of math inside text
5
Using mathspec to change digits font in math mode isn't working
2
Why can't I renew the \label command in math mode?
4
Fake math sizing using tokens assignment
0
Custom command for begin-frame with package beamerarticle
2
Make paired delimiter with prefix for Re and Im
2
Alternative to using inline math mode for single letters?