Why did latex choose italic for emphasis text

This is not a duplicate of What is the canonical way to redefine the \emph command because I am not looking to change the behavior of \emph{}.

I just wanna know why did LaTeX choose the default behavior for \emph{} to be Italic. Despite the fact that bold is more apparent and emphasis the text more (in my opinion).

This is to address the "Why did LaTeX choose" part of the question, neatly sidestepping the "italic for emphasis text" part (already elaborated by others in the comments above, which they can post as answers if they wish).

The short answer is that LaTeX did not choose anything; there was no choice to be made.

The question is backwards and makes it sound as though LaTeX started with a command called \emph and then decided what its visual representation should be. This, of course, is not what happened. Instead, TeX started as a system providing facilities commonly needed for typesetting (such as picking boldface and italic fonts). For example, you could type \it to say "use the italic font from now on".

Later when Leslie Lamport developed LaTeX, it had the philosophy of "logical design" or "separating content from appearance (presentation)", similar to Brian Reid's Scribe system of the time. Using font-changing commands like \it does not always fit with this philosophy. If you look at why people switch to italic font (as I did in this sentence), it was, and is, usually for emphasis. (This is mentioned in the very first paragraph of the lead of Wikipedia's article on italic type. There are other reasons, such as titles of works, foreign words, and names of ships.)

This is nothing specific to the (La)TeX world; e.g. here are some italics from the early pages of the first two Harry Potter books (Scholastic Press edition):

So it makes sense that LaTeX would come up with a command for indicating the logical notion of emphasis (namely, with \emph{…}) rather than the visual notion of italic font (with \textit{…} or {\it …}). There is a draft LaTeX manual from 1984 floating around on the internet, which does not mention the \emph command. I don't have access to the first edition of the manual (LaTeX: A Document Preparation System) from 1986, but this is what it says on the topic on page 16 of the 1994 second edition: 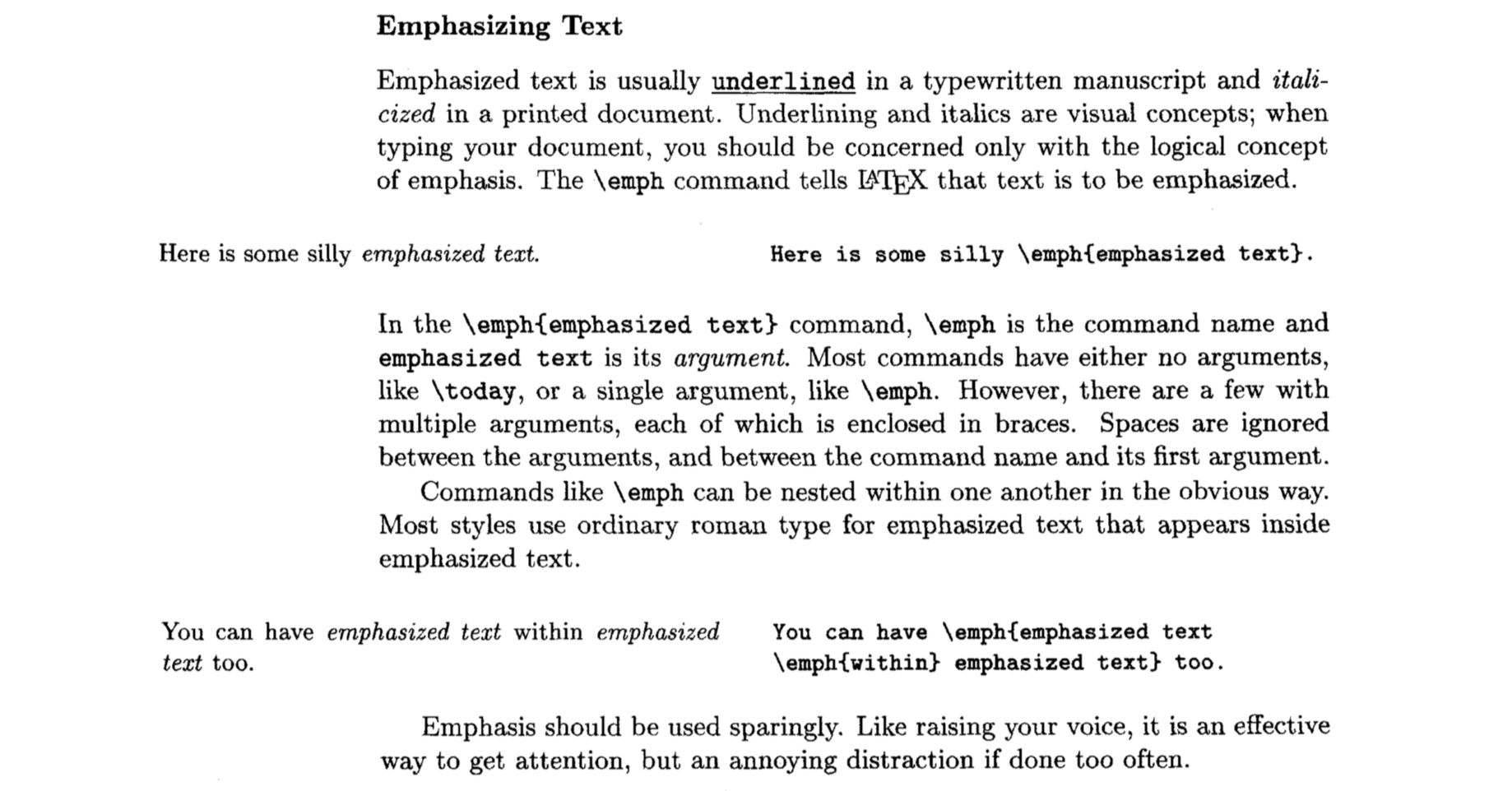 Not the answer you're looking for? Browse other questions tagged typography bold italic emphasis tex-history or ask your own question.

48
What is the canonical way to redefine the \emph command

11
Italic in theorem environment
7
How to change text to bold when font does not support bold
8
Automatic upright math when text is in italic
2
How to change seagull color theme alert text to non-bold
3
Changing the behaviour of `\emph'` inside an environment
1
Creating bold and italic text not working with a custom font?
4
Why are inline math symbols shifted left when used inside italic text?
1
How to use bold font on arbitrary string fragments, without affecting adjacent characters?