I need to output the below text but since \ is a special character, I cannot:

Also sometimes I need use dollar sign $ as well but it seems to be a special char, too.

What is the way to escape those in LaTeX?

I used \verb as suggested but I am unable to run commands inside it. Also, in the output the font and the opacity of the text is different than the default one:

The following ten characters have special meanings in (La)TeX:

Outside \verb, the first seven of them can be typeset by prepending a backslash; for the other three, use the macros \textasciitilde, \textasciicircum, and \textbackslash. 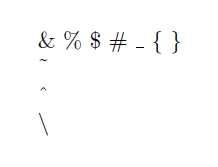 Note that the seven "single non-letter" macros don't gobble the space following them. For the last three that do gobble up the space after them you can try one of these methods to add space.

After \verb should go a character that's not used in the text to print "verbatim" and the same character should follow the text.

This command has a drawback: it can't be used in the argument of other commands.

There's a second "solution" which can come handy if it's needed a limited number of times:

where commands inside the argument to \texttt are allowed. It's not even necessary to use \texttt:

will work as well (when T1 font encoding is active) and will print the string in sans serif type.

I needed a way to escape all special characters and I found this Perl function:

For example it will convert this:

I was surprised the use of \detokenize was not shown, but I then noted that egreg had it at one point until Phillipe pointed out that

And a drawback you don't mention of \detokenize is that it inserts spaces after macros names with more than one character (not sure if it's relevant for regular expressions).

The tokcycle package, as part of its examples document provides an \altdetokenize which, despite its name, is not an alternate way to detokenize. Rather, it takes detokenized output and reformulates its appearance to remove those ugly spaces that are inserted after macros, when it is appropriate to do so (through strategically placed \unskips).

In the MWE, first \detokenize, then \altdetokenize as described in the tokcycle examples document: https://ctan.org/tex-archive/macros/generic/tokcycle. Note that T1 font encoding must be active for backslashes to render properly.

This is an interesting macro in that, unlike the recommended tokcycle approach of collecting the processed tokens from the input in a token list and then outputting the token list at the end, this macro works in real-time, outputting its result during, rather than after, the token cycle. This is possible because the output is detokenized, and I don't have to worry about macros in the input stream demanding arguments that have not yet been processed.

Just in case anyone is looking for another way to escape special characters, this can be done with the listings package.

Since all characters will be displayed as they are, it is not possible to execute any command inside the block.

Update: the inline listing \lstinline supports the math mode by including the mathescape option. It also supports the escapechar option, but it needs to be activated manually (more here).

It can also be customized:

Not the answer you're looking for? Browse other questions tagged symbols tex-core characters or ask your own question.

152
Hash character in LaTeX
50
Is it possible to write the '%' symbol in text in LaTeX?
33
How to type & in LaTeX?
4
Prevent LaTeX from thinking I'm writing an equation
5
how to insert % symbol in a statement without intending comment?
7
How can I print escape characters in LaTeX?
4
Printing >, <, and % in LaTeX
1
How do I print $ in LaTeX
3
Using ^ but not as a power symbol in latex
1
Why does my document 'error' when using '%'
See more linked questions

4
How to handle % character in LaTeX?
3
How to display Euro sign in verbatim mode?
5
How to never accidentally write sth. which is really, unintended, a special sequence such as `` or ?`
10
How can I get a better pound symbol (number sign, hash character) "#"?
4
How can I insert complex regular expressions into tabularx cells?
9
Can LaTeX change the behavior of core TeX commands?
0
Morphological erosion and dilation operation in latex