Trying to research this question has been difficult. Not sure what nomenclature to use when searching the web, so here is an example: would like to achieve this:

This post seems promising. A number of posts go into how to top/center/bottom align in a cell, and this one seemed promising also, however they mostly all seem to be about top/center/bottom alighnment and not how to align the object in the left cell with the one in the right (on an individual line basis). The first link gets somewhat there except it is not clear how to achieve the following:

It seems that this method could become complicated (the list to be inserted is quite large, and it needs to be in the format presented). Is there a simpler way to achieve the picture above (knowing that there will be about 30-40 rows and two columns)?

Here is the example code in tex: More research is needed, as the meaning of 20cm after \pbox is not totally clear.

Note the above tex does not actually work correctly. The right hand side is chopped off. It looks like:

Questions: Can this reasonably be done in TeX? Is there a simpler way to do this (in Tex)? Can the bullet point items above be remedied?

Here are two solution using a tabularx and a tabular, respectively.

tabularx: The r column specifier makes the column right- and top-justified. The X specifier results in a column with a width extending as much as the first parameter of tabularx (\textwidth in this example) permits.

tabular: The p column specifier takes as argument the width of the column, 9cm in this example.

To have the first column consistently in boldface, you can use > to inject formatting commands at the beginning of each cell (\bfseries in this example). For this to work you have to load the array or tabularx package.

Finally, I recommend not to use vertical lines. In my opinion best results are obtained with the the booktabs package (providing \toprule, \midrule and \bottomrule as well as improving the interline spacing). 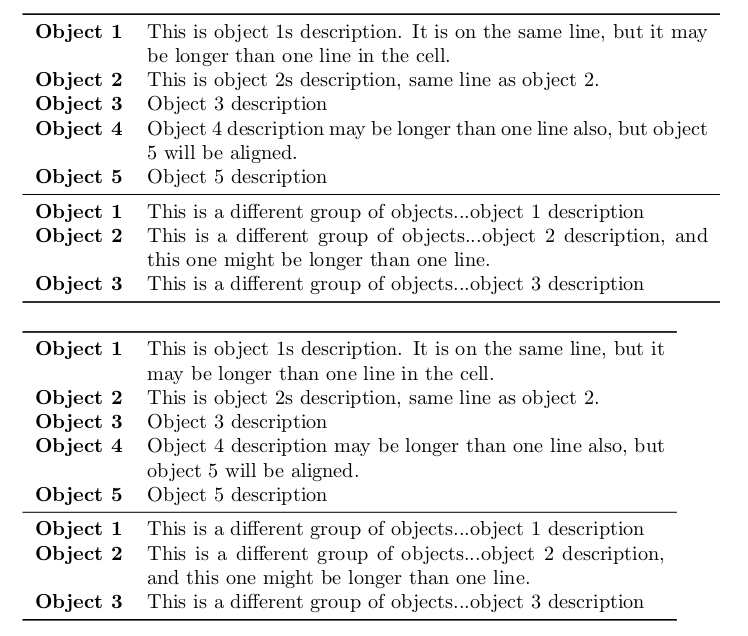 This seems to be relative simple to arrange.

First, I'd advise you to use a p{width} column. That column-type will be able, to wrap the lines. Unfortunately, the p, b and m-columns will justify the text on both the left and right side.

Second: if you want to fit the width of the whole table onto your page neatly, than you should consider using the tabularx-package. This is able to stretch a column to use the maximum given width. To do so, it introduces a new column type, the X(capital X) column. It is identical to a p-column, in that it uses a stretchable width dimension.

Third: (as long, as I understood your question correct!) you want to have "Object1" to be the first entry of the first line, and "Object2" to be the beginning of the second line and so on, it would be much easier, to enter your table one row after another, instead the way you did (first to insert all entries in the first column, than all text of the second column, fiercely hoping, that they will magically align well!).

Fourth: To have the second column justified on the left (or right side) side --just in case --, you'll have to add some extra magic in the declaration of your table. In this case, use the >{\cmd} trick. The > will act everytime you enter the column, that the sign is pointing to. When the >acts, it will execute the code and commands in its braces. I used that trick, to have the first column in bold face series (command \bfseries) and in the second to get a flush left margin, by executing \RaggedRight. \RaggedRight come from the ragged2e-package. It enables a much better wrapping as the standard LaTeX \raggedright (all in small letters). The first command will break words, to have a better filled line, while the latter will only break the lines between words, which will waste space, especially in small columns.

Fifth: you were asking for a right formatted first column. Than you should use the r-column identifier for the first column. I changed that.

The following MWE will show you, how to typeset your desire in LaTeX. There is no need, to switch over to TeX. I'd say:

Wait a moment: you asked for justification on the right but your image is justified on the left. I am unsure ... No problem. If my MWE is wrong, replace \RaggedRight in the definition of the table declaration to read RaggedLeft.

Here is my example:

And the visual proof, that looks as your example image:

Just to be sure, this time using \RaggedLeft:

Also note: you used a c indicator in your example for the first row. That will centered the content of the first column. As your "Object x" do nearly all use the same width, you won't notice the difference to my r-column. Therefore, I used "Another Object 1", which is much wider. This shows the effect of column type definitions l, c and r much clearer.

Not the answer you're looking for? Browse other questions tagged tables formatting vertical-alignment or ask your own question.

7
Aligning paragraph inside a tabular
11
How to vertically and horizontally centre text and images in (different) table cells?
7
\hfill in in table cells
0
Horizontal Line Extends Past Table Edge
2
Long text in rotated multirow
2
Crossing out multirow/multicolumn cells
2
Tabbing and aligning within different table cells
2
Help with justification of running text
0
LaTeX Table - How to draw cells with multiple rows?