Removing superfluous space after equations at end of beamer items

I am trying to write an itemized list in a beamer frame, with additional space between items. As a consequence the space between an item ending with a formula and the next item is extra large, as the additional space from \vfill is compounded with the lower whitespace of the bounding box. This can be seen in the following MWE: 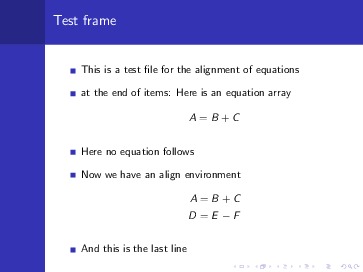 While I understand the logic behind these extra large vertical spacing, at least to me this looks esthetically not optimal. As TeX is usually so well thought out, I assume that there is some standardized way to address this issue. My questions are

While both topics, changing space at separation of items and bounding boxes for equations are discussed in many questions, I could not find any that addressed them in combination. If adjusting the spacing around equations as outlined at How to globally change the spacing around equations?, this affects also equations in the middle of an item (which should stay as they are). If adjusting the space between items as suggested at Global setting of spacing between items in itemize environment for beamer, then also breaks of other items are enlarged, not only those ending with an equation.

EDIT: Adding from the comments: I have in total around 300 slides, being the total of all slides of a course, that I try to polish before giving them as a single file to the students (they have already the files of each lasses content, but I prefer to provide also a version presenting the whole course in a single file). In my opinion some of the slides do not look good without additional spacing. I tried to focus in my MWE on the direct problem of cumulation of spaces, not to provide the worst example of a not well spaced slide.

I was having the same problem as you and found this page. Basically, simply add

and it works fine!

Not the answer you're looking for? Browse other questions tagged beamer spacing equations itemize or ask your own question.

46
Global setting of spacing between items in itemize environment for beamer
67
How to globally change the spacing around equations?