The package babel with the ngerman option (and most other languages as well, but not english) provides the shorthand "|, which prevents a ligature at the given position (see p. 81 of the babel documentation, e.g. Auf"|lage will result in the word Auflage without an fl-ligature (as is desired because, in German, you don't want ligatures across morpheme borders).

However, when placed in a macro, "| doesn't work anymore. Why is this and how can I circumvent it? 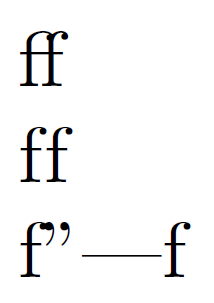 It works if you switch the shorthand on before defining the command, or if you define the command after \begin{document} when shorthands are active.

As Joseph commented, it's recommendable to switch it off immediately afterwards, so that the active shorthand doesn't affect other commands.

Alternatively, you could switch it on locally within the macro definition, similar as written here by egreg, and made robust, so it can be used within moving arguments, such as \chapter and \section headings and captions.

However, it might be useful to have a part in the preamble where shorthands are active, as in the first solution, so you can use them in your commands such as in text arguments to macros.

Not the answer you're looking for? Browse other questions tagged macros babel ligatures shorthands or ask your own question.

7
How to define a new command for guillemets marks
3
Using “German” quotation marks inside \newcommand
2
Problem with babel
2
Command containing babel shorthand not expanding
1
Russian em dash in macros
1
Using "= in preamble with babel
12
“ with tipa and babel's ngerman / \shorthandoff{”} in a macro
1
Clash between TIKZ and French Babel
1
Argument of \language@active@arg" has an extra } — but shorthands should stay
4
babel: adding language shorthands to work inside glossaries
See more linked questions

9
Write a class with language dependent strings
10
What is the difference between \declare@shorthand and \defineshorthand in babel?
4
biblatex/babel autolang= doesn't work with idemtracker
14
"| shortcut no longer available in babel?
2
Why does my user-defined Babel shorthand containing tipa not work?
3
How can I redefine germanb.ldf-shorthand "| for italics only?
1
Shorthand for deep enumitem