Chapter without pagebreak? (In twocolumn document.)

Background: I am translating a set of gaming rulebooks into a single scrbook, with each original rulebook represented by a part in my scrbook. Layout of the rulebooks is relatively uniform, with fancy chapter headings beginning on a new page each.

The exception to this is the first rulebook / part, which has very short chapters, sometimes several on a single page, but following the same numbering scheme as the more elaborate chapters in the other rulebooks / parts.

I could typeset that first book seperately, using sections instead of chapters, and include the resulting PDF. That way, I would lose the common TOC / LOT / index, which would be unfortunate.

I could wing it by redefining header formats for the first part, to make sections "look" like chapters and subsections look like sections and subsubsections... and so on. Pretty heavy-handed.

Edit: The solution in Start new chapter on same page (using etoolbox to patch the clearpage / cleardoublepage out of the definition of \chapter) does not work for a twocolumn document, yielding "Float(s) lost" errors. (I hadn't mentioned the twocolumn detail before as I did not think it would make a difference.) User lockstep asked for a seperate question; instead, I vote for re-opening this (edited) one.

Is there a way to tell LaTeX not to put a pagebreak for \chapter in a twocolumn document?

As switching between twocolumn and onecolumn causes a page break, one may use the multicol package and its multicols environment instead. (The environment's optional argument is used for introductory one-column material.) In the following example, I use the twocolumn class option to achieve smaller margins, then temporarily switch two \onecolumn at the start of the document. Page breaks before chapters are removed by disabling \clearpage inside a group.

Note: The vertical space before chapter 1 (typeset with multicols) is actually larger than the space before chapter 3 (typeset with \twocolumn). The larger space is caused by LaTeX bug 3126 (\twocolumn interfering with \topskip); for consistent spacing, use multicols environments for every chapter of your document. EDIT: Even better, use Frank Mittelbachs answer to Is it possible to define a `multicols{2}` preamble switch that works for \chapter? 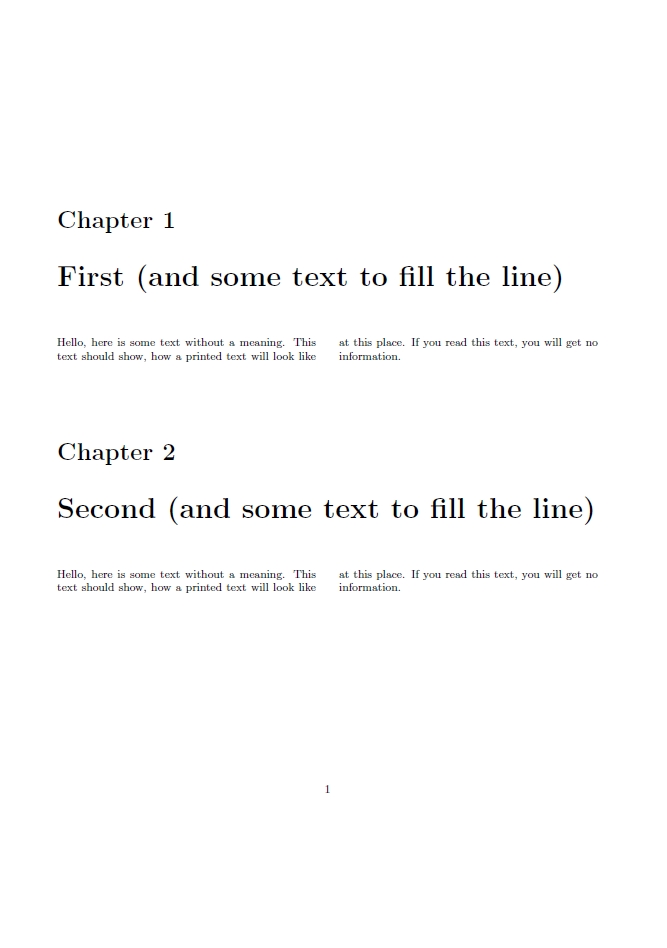 Not the answer you're looking for? Browse other questions tagged sectioning page-breaking chapters two-column or ask your own question.

2
Remove page-breaks after chapters in the report class?
116
Does it matter if I use \textit or \it, \bfseries or \bf, etc
88
Start new chapter on same page
13
Is it possible to define a `multicols{2}` preamble switch that works for \chapter?
8
Solid black boxes in multiline chaper titles
0
Pagebreak on \twocolumn and \onecolumn

10
Adjusting the postion of chapter numbers in the Tufte-Latex class
2
labbook/scrbook new chapter not on separate page
0
In book style, how to change the chapter according to style guide
7
Same \chapterformat for \chapter and \chapter* without titlesec
2
Section without a chapter number, in a chaptered document
0
Pagebreak on \twocolumn and \onecolumn
1
No page break between sections in scrbook
13
Comparison between \newpage, \clearpage and \pagebreak, etc.?
2
Latex/scrbook - no pagebreak above chapter
1
After some chapter headings document leaves page empty before text