I have a two-sided document with fairly large margins and figures spreading into the margins. I'd like to set marginnotes/sidenotes with the following requirements:

Here's my MWE using both sidenotes and marginnoted to show the difference:

and a screenshot of the document: 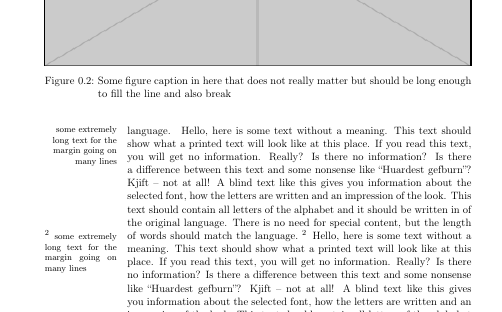 \sidenote uses \marginnote when an offset is given and \marginpar otherwise. \marginnote does the \raggedleft/\raggedright stuff but \marginpar doesn't. On the other hand \marginpar tries to float the notes so that they don't bump into each other.

So there are basically two solutions:

(1) Give an offset in the definition of \smallside:

But then your sidenote will no longer float, so they can bump into each other. But you do get the proper ragged stuff.

(2) Change the definition of the sidenote macro part where the choice is made between \marginpar and \marginnote and supply the \ragged... stuff to \marginpar.

By the way, I think there are some spurious spaces in the sidenotes package. I had to get rid of some in the above macro definition.

Piet van Oostrum's answer did not compile for me (I am not reputed enough to comment on it). But surrounding the first (optional) argument to \marginpar with braces does the job. I also replaced the \ragged...marginnote commands of the marginnote package by just plain \ragged... commands, but that is not necessary:

Not the answer you're looking for? Browse other questions tagged horizontal-alignment marginnote sidenotes or ask your own question.