When is it harmful to add percent character at end of lines in a \newcommand, or similar

Since egreg has graciously agreed to not comment at least for a day to When not to use \ensuremath for math macro? :-), I thought I would take advantage of that and post a question about another (non-offical) campaign of egreg: additional % at the end of \newcommand and similar macros.

After starting out with LaTeX and defining numerous macros I ran into TeX Capacity exceeded problems. After considerable time, I was able to come up with an example small enough that reproduced the problem and posted it here:

That and the following provide a good explanation of what is going on:

So, I got into the habit of adding a % at the end of every line within the preamble, even after \usepackage{} and following the last } of a \newcommand, where is it strictly not necessary. My logic being that I did not see any harm and was easier to just add it rather than try to think about whether it was needed or not.

However, a comment was made in Defining command containing pagebreak, and boxes:

Sometimes, I even added trailing % within the document body, but noticed an answer was edited to remove the %. For example this answer for Producing different versions of a document originally had a trailing % after every line. Now, in this case this is not part of the preamble, but again I thought there was no harm in including them.

The only situation I am aware of where there is an issue with a trailing % is mentioned at What is the use of percent signs (%) at the end of lines?:

I prefer solutions that require less thought, so I tend to include a trailing % even though it may not be absolutely necessary. So, I would like to know when is it harmful to add a trailing % in the definitions of \newcommand and similar macros? Are there other cases besides the above \show.

Here is the MWE: The two macros \mymacroA and \mymacroB are identical, except for the trailing %:

The general rule is that spaces after control words (\par, for instance) are ignored, while after control symbols (\!, for instance) are retained; spaces at the beginning of a line are ignored altogether. Consecutive spaces are transformed into one space token but two consecutive end-of-lines become a \par (this statement is not fully correct, but not too incorrect for the purposes of this answer).

After the tokenization stage

There is an obvious intermix between tokenization stage and subsequent processing. In what follows "space" will mean "space token" and I won't care about spaces that have already disappeared, such as those after a control word).

It's now important to know that spaces in the input don't always produce spacing in the output. To understand why, it's necessary to learn some theory.

TeX is always in one of three modes: horizontal, vertical or math.

(The above paragraph tells a lie, strictly speaking: there is a circumstance in which it's not in one of these modes, but it's irrelevant for the discussion.)

Under normal circumstances spaces do not produce output in vertical and math mode (let's not discuss the very special settings that make them appear).

It's quite easy to tell when TeX enters math mode: as soon as it sees $ or $$ (which, in LaTeX parlance, are, respectively \( and all the display math environments, initiated by \[, \begin{equation}, \begin{align} and so on). It exits math mode, returning to the previous mode when it sees the closing $ or $$ (with similar remarks as before for LaTeX).

Roughly speaking, TeX is in vertical mode at the start of a job or after a \par or when it's beginning a \vbox or \vtop or \vcenter; these are started, in LaTeX, by \parbox and \begin{minipage}. However, spaces in vertical and math mode are not suppressed: they are there, but produce no output. This is a cause for some misunderstandings. TeX starts horizontal mode when it sees a character to be typeset, \noindent, \indent or some other commands, notably \leavevmode (this is not an exhaustive list) or when it's starting an \hbox (for LaTeX it's \mbox, \makebox, \fbox, \colorbox, ... or the lrbox environment). In horizontal mode every space that's not absorbed by other rules (see later) produces output.

The most important (but easy) rule that should be considered is that tokens in the body of a definition are simply stored and not executed (they can be expanded in a \edef or \xdef, but still not executed). The execution is performed (after expansion) when the defined macro is used. The execution of a space token in vertical or math mode does nothing, in horizontal mode it produces a spacing in the output.

There is a place where space tokens have a peculiar behavior. When TeX is looking for a number or a dimension in order to perform an assignment or when expanding \number and \romannumeral, it expands tokens until an unexpandable token appears or a space token is found. In this case, the space is swallowed as part of the process.

This is one aspect to be kept in mind when writing macros. Let's see an example: we want to make a "monthly to-do list". Just a \parbox with twelve lines labelled by year and month; a loop seems the best approach, with the year given as argument:

Try it; this will surprise you with

Oh, boy! We've made sure that no spurious spaces were inserted by our macro! Why is TeX betraying us? Simple: the input can be written equivalently as

and #1 is replaced by 2013. So our loop checks whether the current value of \monthlycount is less than 132013 and stores tokens for the \parbox until TeX runs out of memory. 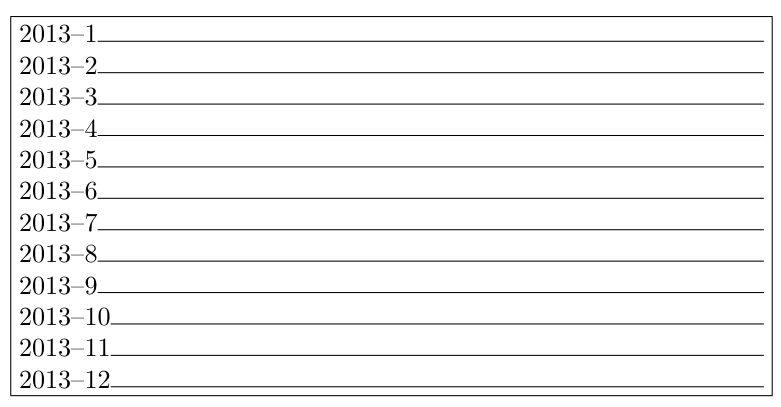 Exercise 1 Why some lines end with % and other lines don't? We now know that % is harmful after 13 (and also after the 1 in the preceding line).

Technicality: space tokens are looked for but then swallowed also after keywords (such as by in the example and the unit names mm, pt and so on). There are also a few other places, but this answer is already too long. I'll show only how some of the problems can arise also when using LaTeX functions in this context:

Exercise 2 Why isn't % necessary in lines 4–9 of the code above?

You should first understand the rules applied to spaces (except inside verbatim of course):

Note that in your \show example the % is simply there to protect the editor to remove the space as a trailing space turning \<space> into \<newline>. You don't need to have it there as long the space stays there, but it is just saver.

Then there are really some advances situations where TeX allows for an optional space, where you want to add a space so a space which follows is not taken as that optional space. I know this from \let\dummy=<space>, which is used to remove a space from the input stream. Often such code is used in a parser loop and removing that space would cause issues, because now the next token is removed, not the space which is taken as the optional space. I encountered situations where a loop can be turned into an endless one just by removing that space. There was an answer which had this included, maybe I find it again.

When not to add percent character at end of lines in a \newcommand, or similar

You don't need to add percentage signs when you use a convenience environment from the good people of LaTeX3:

Saves typing and conserves percent signs! Answered in the spirit of http://en.wikipedia.org/wiki/Barometer_question, when the title of the question was as quoted!

3
Problems with TeX scoping
193
What are the most common mistakes that beginners of (La)TeX and Friends make?
468
LaTeX figures side by side
369
What is the use of percent signs (%) at the end of lines? (Why is my macro creating extra space?)
131
When not to use \ensuremath for math macro?
59
Where are the necessary places to be appended with % to remove unwanted spaces?
45
(La)TeX -- What does the '%' character do?
37
TikZ rectangular node with different rounded corners
16
Is it possible to add an "or" condition to a \def?
20
Producing different versions of a document
See more linked questions

32
How can I use \patchcmd with commands with optional arguments?
17
Why do paramaters of \renewcommand need to double up the # within a \foreach
4
Using soul with indirect formatting applied (using macro with 2 parameters, one possibly optional)
2
Reading and (custom) formatting a CSV (not \csvautotabular)
9
Macro like `\ignorespaces` for ignoring `\par`s
0
Specify behaviour of concatination of two macros
2
Make paired delimiter with prefix for Re and Im
0
Right way to write commands and parameters