I'm trying to create a form for a role-playing game, and I'm having problems creating the effect I'm striving for.

Here's what I have (ignoring the incredibly convoluted messes that kinda got closer to my goal, but were incredibly fragile):

I want to control the width and thickness of the lines to be filled in. I'm using \rule in this example for this purpose. Being able to control the shade (to make it grey) would be a nice bonus.

The tiny labels ("Name" and "Class") should be nestled immediately under the line above them. I'll want a small gap that I can control, but certainly far less than in this example. \hrule seems to accomplish what I want; I can just add a \vspace for the desired gap. But I can't control the thickness of the hrule.

When a rule is on the same line as text ("Str" and "Dex"), the top of the rule should be positioned somewhere between where an underline would be, and the font's baseline. In this example it's too high, I believe because the bottom of the line is at the baseline.

I want to control the spacing between a line and whatever is above it. It certainly needs to be larger than in this example.

*The goal image was created in an image editor using the "what I have" image as a basis.

It's best to define parameters that you can use globally within your document, or macros that take arguments and sets similar things in a similar way. This provides consistency and allows for changing things quite easily, if the need arises.

Below are two macros \ruleandname{<name>}{<width>} and \rulewithattribute[<drop>]{<attribute>}{<width>}. The first sets a <name> just underneath a \rule of width <width>. The latter sets a 1cm rule, then an <attribute> followed by a \rule of width <width> the rules are dropped (using the optional argument of \rule) by the amount <dropped>; a negative length drops the rule, while a positive length raises it; default is -.1\baselineskip). 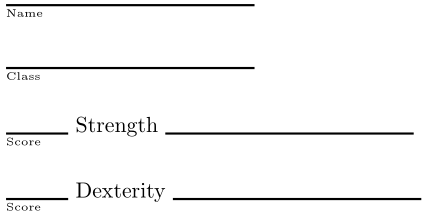 It provides a start, with many possible modifications.

Here almost everything is parametrized: 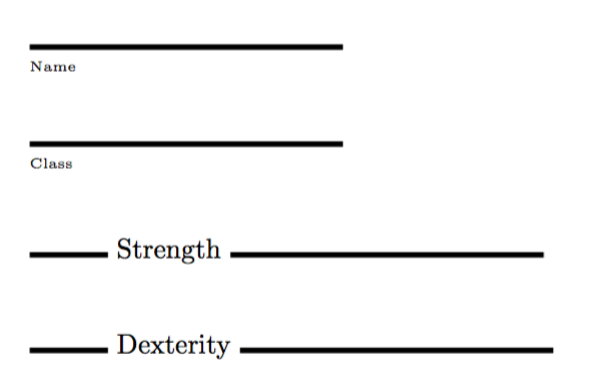 You can perhaps add parameters for the font sizes.

I just played around a bit and have the following code as a result. Due to \baselineskip it should work with most fonts and sizes. 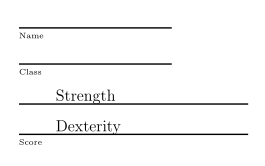 You can change the percentages of the vertical spaces to your liking.

Not the answer you're looking for? Browse other questions tagged questionnaire or ask your own question.