How to gather (narrow) floats together horizontally?

I have a document with some narrow (less than half the \textwidth) images. Sometimes there's one such image on the page, and then the figure environment is what suffices. But sometimes there are two such floats on one page, and I'd like to have them put side by side. Does anybody know of a LaTeX package doing something like this? (A ConTeXt solution would be equally welcome.)

Edit: to be more precise, this is my use case: the document is a problem set. Some problems have a graphic associated with them, usually rather narrow. If two problems with a graphic happen to fall on the same page, I'd like to have both figures combined (maybe on the top of the page, maybe near the first problem, this is not that important for me). And if I change the order of problems (which I do quite frequently), or even add some more of them anywhere in the middle, the configuration of images can become totally different, and that's why I'd like the solution to be at least semi-automatic).

In the interim, until someone can find a suitable alternative, here is what I would consider a semi-automatic solution:

You specify the problem-specific figure in a command that would accompany the figure. This way, in the logical layout of the document, things should be kept together. Then you set up a figure environment on a per-page basis, as needed, and merely list the commands (problem figures) in the figure environment. Here is a small MWE that illustrates this: 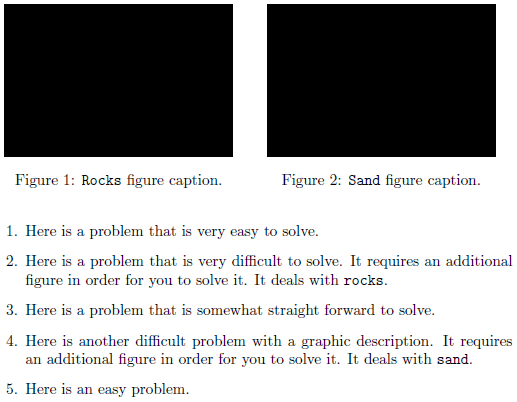 This is semi-automatic since the little intervention of listing the commands in a figure environment seems minimal compared to a different, automated figure mechanism. Also, this approach works if you only have one figure within you per-page figure.

An improvement on this would have to, through trial-and-error, establish the following:

While [3] and [4] may be considered as possible/likely, [1] and [2] might cost you a bounty in excess of your (or anybody's) reputation. In general one should consider the trade-off between whether or not the benefit of automation outweighs it's existence.

I cannot provide a complete solution, but an idea with some pseudo code. Maybe someone who knows how to read the aux file could add the missing code. The MWE compiles, but has the missing stuff in the comments.

Later, the option of a third figure on the same page has to be added.

On a sidenote ;), we put small figures in the margin. Then, they are (almost) always next to text they are mentioned. It might or might not save space, depending on the number of small figures. That works particularly well with the marginfix package. If you want to give that a try, you can replace the \usebox line with \marginpar{\usebox{\@boxone}}% Hence, the weird page layout with ample margin.

Not the answer you're looking for? Browse other questions tagged floats positioning or ask your own question.