Following this answer, I have a data file P.dat which I need to plot it as a filled contour plot.

However, I got this error

I would be grateful if I could know the error source and how I can make the output match the MATLAB desired one. 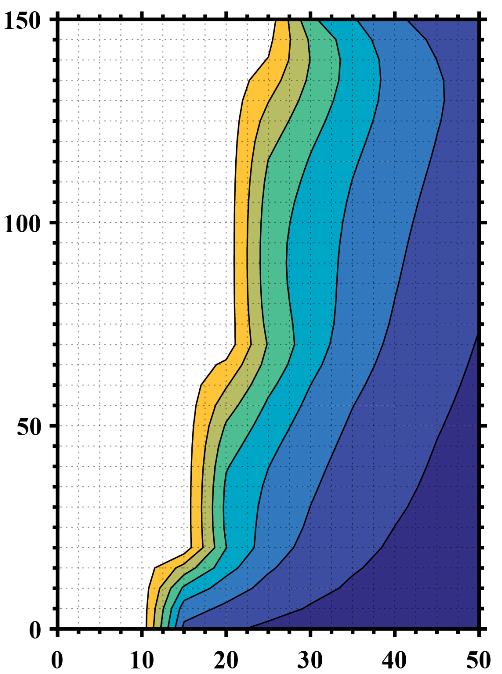 I made another data file with NaN z values to account for the void data (white space) and specified the number of rows and columns, but I got this undesired output. 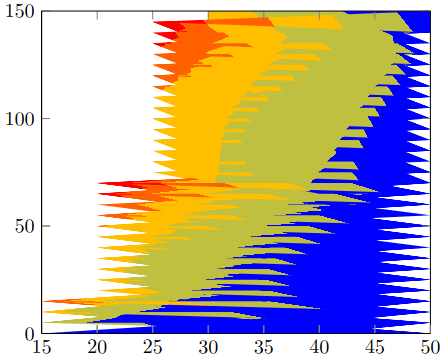 Recalling my raw MATLAB data, how can I remove all the points whose z values equal to or exceed 1723 in order to get an output similar to my desired one? 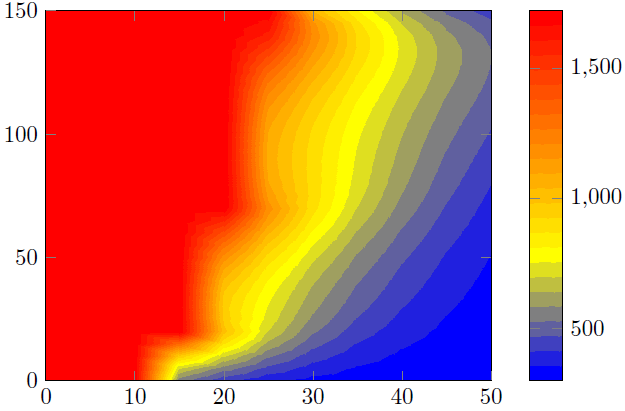 Solution 1 (left part of the image)

This tries to reproduce the Matlab figure with the capabilities of PGFPlots. To "confirm" that I did it right, I first saved your Matlab image and cropped the axis parts. Then I added this as \addplot graphics and on top of that I added the real plot, i.e. \addplot contour filled plot in 50% transparent. That allowed to check, if I found the interval boundaries right.

Said that I think your above statement is wrong. It seems that you removed the color for all values >1600. This also makes sense, because the maximum value in the P3.dat file is 1723 ...

Solution 2 (right part of the image)

Here I just used the above cropped Matlab image and reproduced the colorbar.

As you can see in solution 1 there are some "artifacts" which don't make the result as smooth as the Matlab result. That is, because the contours calculation/visualization only depends on the features of your PDF viewer. Said that it could be that your result differs from mine. I made the screenshot from a view in Acrobat Reader XI.

That is why I favor solution 2.

To improve the result you should modify your Matlab view to only show the contours, that means remove the axis and the grid lines. Then the only difference could be the colors used/shown in Matlab contour plot and the colorbar calculated by PGFPlots. Concrete I mean that one could use RGB colors and the other CMYK. But since you have the illustrator as you said, you could check for that and adapt one of the both parts, i.e. the Matlab or PGFPlots output.

You could also create a "pure", that means also without any axis, version of the colorbar in Matlab and also import this graphics into the PGFPlots colorbar. Of course then colors are identical.

For more details on how the solutions work, please have a look at the comments in the code.

23
Fill a contour-plot
9
How to set the isolines in a contour plot and observable with non-Acroread previewer
4
PGFPlots: How to reproduce MATLAB colorbar and make it span multiple plots?
3
'parula' colormap in pgfplots
2
Matlab2tikz problem with contourf
1
How to include a MATLAB (.eps) graphic

19
plotting two time series with bounds
12
Polar Plots - layout and extraction of crucial parameters
11
How to prevent rounded and duplicated tick labels in pgfplots with fixed precision?
8
How to hide empty (value 0) ybars with pgfplots?
9
pgfplots: percentage in matrix plot