Understanding a \@for loop

I'm having trouble with a \@for loop. I've got a macro that takes a comma delimited list and puts each element into a row of an array. When I do this using a \@for loop, I get an extra row that I don't understand. I can manually get rid of it with a negative space, (as in the commented line below) but that can't be the right way to do it, so I must be doing something wrong. Here's a minimal example. For comparison, if I construct what I expect the result of the loop to be manually, the extra row doesn't appear. 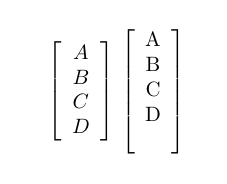 As Altermundus said, you cannot add extra {} or \relax or other invisible material after the last row of the tabular. However, there is some extra material added after \@for. The implementation of \@for is not very good for this.

Since the \@for in LaTeX2e kernel has restrictions, I suggest \forcsvlist from etoolbox:

The problem is that TeX finds something following the last \\ which starts a new row (it's neither \noalign nor \crcr that wouldn't).

A solution might be to use a token register: we develop the loop while in the first cell, so there's no problem of \xx not being defined any more after TeX has seen \\ (or &).

I've used \@xp (from amsmath) that's a shorthand for \expandafter; if the \text around the entry wasn't required, then

would have sufficed. Initializing \toks@ to \@gobble has the effect that the first \\ is swallowed.

Instead of array I've used bmatrix (change it if you like) and, of course, I deleted \ensuremath as the first step. :)

This code gives a new line with an empty group. Each cell of an array is in a group.

\@foris a no developable loopso you need to write something like

or you can create a developable loop but it's more complicated :

\For is a developable loop for example, you can try :

I believe the reason you're getting a fifth, empty row when generating the column vector via the for-loop is that the fourth element (like the three before it) gets a \\ affixed to it; this instruction creates a new row which ends up being blank since there's no further content to create.

A (not very elegant) solution would be to redefine \fbun to take two arguments, as follows:

and to invoke it as

1
Defining a \newcommand for environment in CircuiTikz
35
"For loop" in newcommand
68
Understanding \@ifnextchar
2
dynamic for loop
7
Generating code examples
18
LaTeX for loop \@for
3
Build table elements using a macro
9
Loop code for repeated sums
2
LaTeX Tikz: Compare two \def arguments
4
Iterating through a list and modifying elements one at a time to construct new list