I have a similar question, as asked here: How to set style of a single edge in the tree (TikZ) ?

I have a tree, built with tikz. I want to style some single edges dashed, instead of solid. So i did what was mentioned in the above thread and it did work, but strangely the edged of the nodes themselves followed by the node which has the incoming dotted edge are dotted, too. Why?

Here is the example from the thread mentioned above, changed to dotted edges: 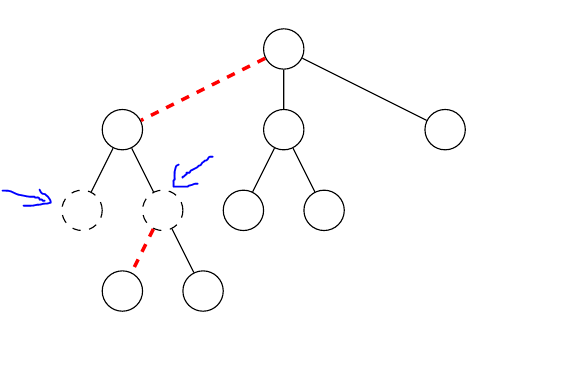 You need to add solid to every nodes/.style

Not the answer you're looking for? Browse other questions tagged tikz-pgf edge or ask your own question.

28
How can I improve this family tree in TikZ?
10
Same node distance between levels in a tikz tree?
2
Tikz-Tree: Arrow-style depending on parent node
1
Adjust edge endpoints depending on node label
8
tikz trees: How to not draw a single edge
9
Line up nested tikz enviroments or how to get rid of them
6
Problems with nested TikZpictures
2
How to remove some edges of a forest?
3
Skip generation in a tikz tree