Placing Intermediate and Output Files in Another Folder

I am trying to figure out a way to cleanly separate the TEX files from all of the intermediate and output files. Various approaches I've tried, including the one described by ‘Bundle’ TeX output in a directory don't seem to work. I'm using TexMaker + MikTex (portable). Ideally, I would like my file/directory structure to look something like this:

Instead, what I have, is the jumbled-up mess where all of these files live in the same directory. I've tried setting the ouput-directory, for example, on pdflatex but this doesn't work. The pdf file still gets created in the same place but now it doesn't show up in the previewer. This should be pretty easy to solve but I've so far been unsuccessful. How can I set up my environment to use the above structure when compiling?

Update: I believe I have narrowed this down to something specific to TexMaker. If the desired aux and out directories are passed via the command line to pdflatex, everything builds as it should. Yet, I get numerous message boxes popping up saying that files can't be found and the PDF doesn't display in the internal viewer. I can't see any obvious options within TexMaker to change to address this. So, has anyone been able to make the scenario I'm describing work with TexMaker?

As suggested by lockstep, I write a short answer: AFAIK, this is currently not possible, because the path cannot be changed for the messages / log viewer and for the pdf viewer from within the Texmaker GUI. There is a feature request on the Texmaker issue list to make the path configurable: http://code.google.com/p/texmaker/issues/detail?id=97 Maybe you are lucky and in a later release this will be available. I personally would also use this new feature (and only backup the input folder, not the output folder).

Since Texmaker 3.4, you can specify the option "Use a build directory for output", which creates a "build" folder in your project folder, and saves everything but the .tex file there. See the manual Now you can also specify the output directory as an option to pdflatex as e.g. -output-directory pdf. But you will also have a copy of the pdf in the build folder no matter what. And I haven't found a straight-forward way to have the output file in the root folder, either.

(And I also have a .gz file in the folders, but that might be an option you can turn off.)

For TeXstudio (since a fork from texmaker, it might be similar there):

Modify the path for the two varables accordingly.

In Texstudio, if you want to save outputs of latex in a directory (and thereby have the directory that contains your source files uncluttered, set the -output-directory option of pdflatex command in Tools → Configure TextStudio → Commands Change the value of PdfLatex the -output-directory option and output is the directory you need the output files to be stored. It can be any name and in any location, but make sure you give is the full path (or relative path). 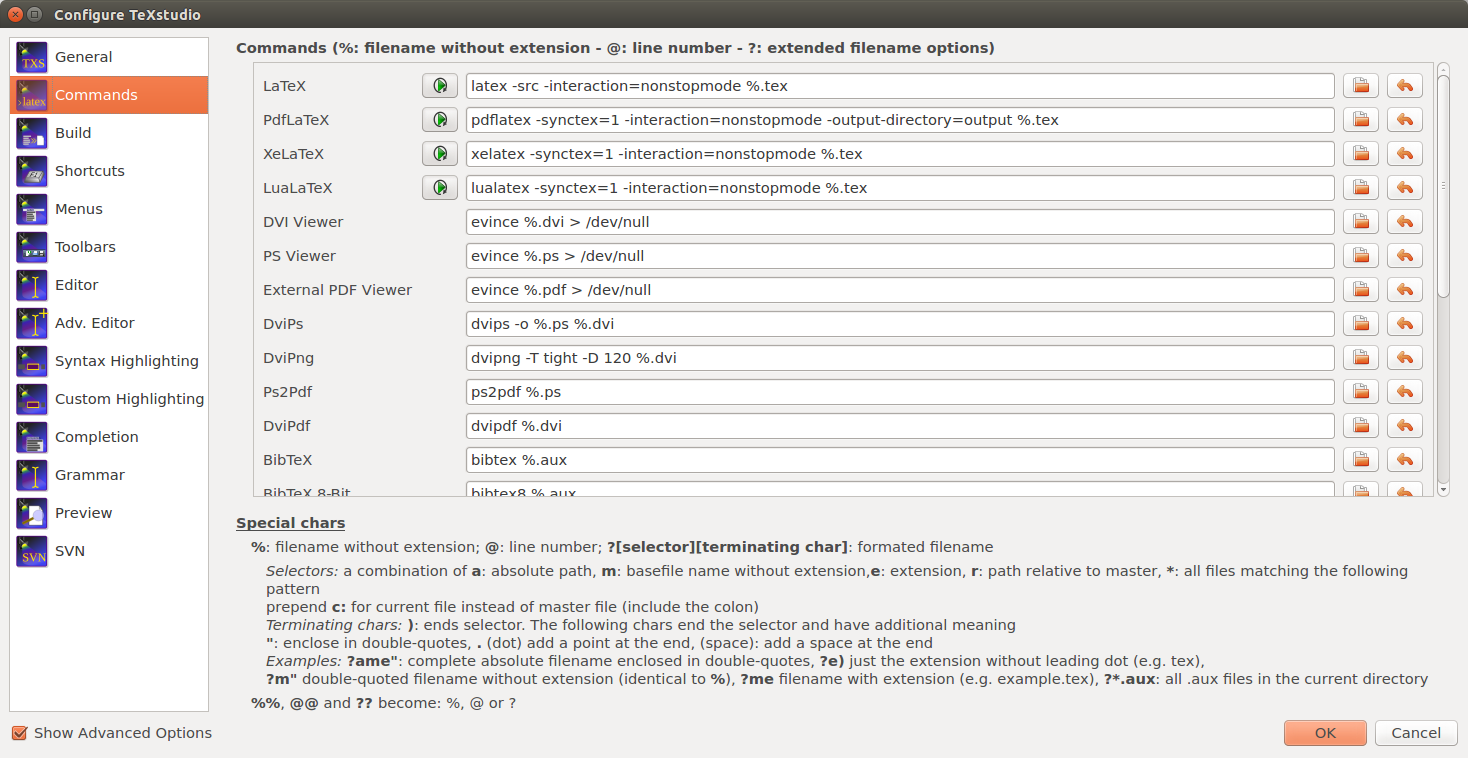 The Linux version of Texstudio (that I am using) does not support -aux-directory option.

After doing that, if the pdf preview does not work, refer to this solution.

In TeXstudio (2.10.8) we can set a subdirectory, in this example named "output", as follows:

With your source MyExample.tex file loaded in the current window press F5 (TeXstudio Menu > Tools > Build & View). After the build completes the PDF viewer should correctly pickup and display \output\MyExample.pdf.

I am not an expert in any of these but this is a solution that works for me (I am using texmaker under Linux but I am sure there are similar commands for Windows):

(Copying instead of moving provides the pdf-viewer from not finding the .pdf)

If you are working on Linux, you might use symbolic links as a workaround, e.g. create the directories ../texfiles and ../pdffiles, then run the following script:

The script can be expanded to update the directories dynamically (needs to be called via write18 or maybe a hook in TexMaker?).

Not the answer you're looking for? Browse other questions tagged auxiliary-files texmaker output or ask your own question.

0
LATEX Change the path the output files
24
‘Bundle’ TeX output in a directory
10
Change the path where (the internal viewer of) TexStudio looks for the generated PDF file?
3
List of the most common causes and solutions to bugs compiling bibliographies in TeX
2
Separate PDF from Build files on typeset?
1
Sorting logs into different folders
1
Trouble with Texlipse and creating index
2
Placing xelatex.exe Intermediate and Output Files in Another Folder
1
copying the compiled pdf in a folder from within tex file