How to reduce the space between two footnotes, making them seem more like two paragraphs?

If I use setspace package to change the line spacing, you can see that there is a big space between the two footnotes. How do I make the footnote just like the main body, as if it were like two paragraphs?

The space between two footnotes is stored in \footnotesep. Change that to zero and voilà:

And here's the bottom part of the output: 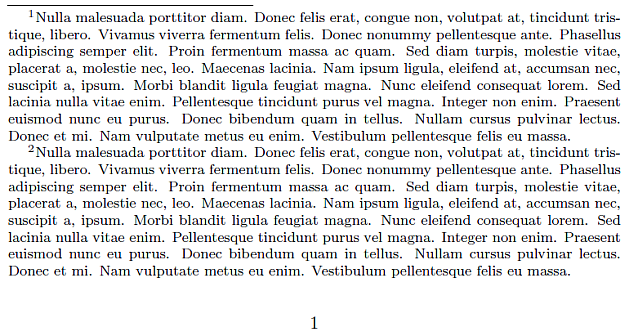 I changed the \lipsum[3] footnote paragraphs to \lipsum*[3] because the unstarred version adds a \par at the end of the paragraphs, which leads to undesired empty lines. The starred version doesn't add the \par. [Thanks to egreg for explaining!]

I commented out some parts of your MWE that aren't relevant to this problem. It is neither influenced by setspace (which doesn't change the line spacing of footnotes) nor by the paper size. The line \setlength{\parskip}{0pt} does hardly anything in a standard document because its standard value is 0.0pt plus 1.0pt, which means there might be a one point space between paragraphs if it's really necessary in order for the entire page to look good. Unless you know why you want to change this, it's recommendable to keep the standard setting.

Not the answer you're looking for? Browse other questions tagged spacing footnotes paragraphs or ask your own question.

7
Change line spacing for footnote text only
21
How to define the default vertical distance between nodes?
2
Why are the Spaces Between Footnotes So Large? (tcolorbox)
6
Unintended effects of a solution to arranging footnotes
3
Recolor text, such that floats and footnotes are affected correctly
2
two or more footnotes in a table
1
Align all text in bullet
2
How to Make a One-Time Space Adjustment in the Display of Two Specified Consecutive Footnotes