Table disappear when I use sideways command

I want to rotate a table, When I use sideways table environment table disappears from the document and also disappear from list of tables. I tried a lot with different possible packages as below. I need the whole table environment(label, caption etc) to rotate.

You don't show what you did so it is not possible to say what is wrong with that, but if you change \begin{table}[H] to \begin{sidewaystable} and change \end{table} to \end{sidewaystable} then you get 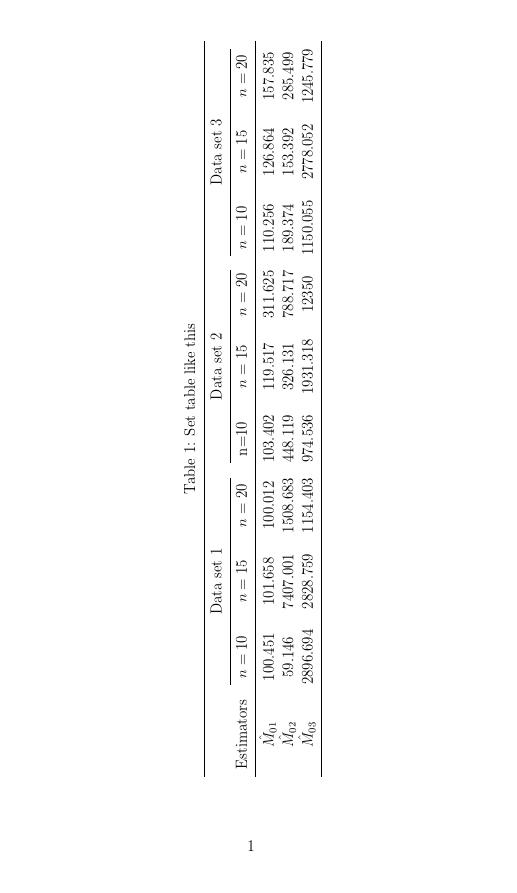 However when the float package is loaded H gets allowed in the optional argument but doesn't actually work for sidewaystable which causes the text to be silently dropped, which is not ideal.

One could argue whether this is a failing in the rotating or float package but since I only have write access to rotating I'll say it is an issue with float. I'll ping its maintainer....

What happens is roughly the following:

In the above code, <pref> stands for the explicit positioning preferences or the default ones.

In the case of \begin{sidewaystable}[H], TeX will find

and now float kicks in. It changes \@float to examine the options; if H is found, it does

which gobbles [H], does some maintenance jobs among which redefining \endsidewaystable to be \float@endH and starts setting a \vbox in the register \@currbox.

At the moment \end{sidewaystable} is scanned, there are two boxes being formed: \rot@float@box and \@currbox. Since \begin{lrbox} does clever tricks with grouping, the box is finished up and after it also \@currbox. But the code of the standard \endsidewaystable that should rotate the box is never executed (and would have no effect anyway, because at the closure of \@currbox, the box saved in \rot@float@box is lost as the register's contents is restored to what it contained before the start of \vbox\@currbox (that is, empty).

Solution: it doesn't make sense to use [H] with sidewaystable.

I'd say even more: a sidewaystable should be avoided as long as possible and it should always be a page float. Setting it as a top float, for instance, would force the reader to do awkward movements for looking at the table; besides, if a sidewaystable fits as a top float, it would most likely fit as a standard (unrotated) table.

Works for me. I took the opportunity to use siunitx for an alignment of numeric volumns on the decimal dot, and load caption for a correct vertical spacing between caption and table without having to specify \vspace{2mm}, and corrected some errors/inconsistencies. In particular, as pointed by @David Carlisle, the [H] specifier should not be used with sidewaystable.

Not the answer you're looking for? Browse other questions tagged tables rotating or ask your own question.