Best way to create an system of equations environment?

I am trying to write a few systems of equations, and I want the terms to be nicely spaced as below

Now, using some very ugly code, I was able to produce the results above.

I would very much want a more automatic way to do this, and a simple method for controlling the spacing between elements. I have looked at earlier posts like

It seems that I am looking for a simple version of this one. I have no need to use side-by-side equations, nor have numbers in front of them.

Using ideas from the post above, I guess the result is done by redefining commands such as - and + inside of the table? I tried to do something like this, but the code looked rather complex =(

To sum it up: Is there a way to define a simple System of Equations enviroment, with proper alignment and a optional command for defining the spacing?

You can try the package systeme. Its documentation is in French, but there are many examples to play with.

Your example would be input as

To get right alignment in the column of right hand sides, one has to manually modify the package code:

The patch is simply changing $##$\hfil into \hfil$##$ but, since this involves # it's not possible to use etoolbox's \patchcmd.

and act on the column spacing with the parameter \tabskip; so, for example,

will spread out the equations both vertically and horizontally. The \syslineskipcoeff can also be issued globally, in the preamble of the document; not the horizontal spacing, though, as \tabskip influences all TeX tables, tabular environments included.

You could use the alignat* environment of amsmath, it's for multi-line equations with alignment at several places. To correct spacing of operators, you could write them as {}+{}. For example:

spalign provides an elementary interface for setting systems of equations: 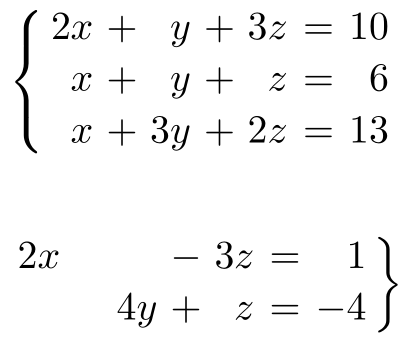 This is inspired by an earlier solution provided by Gonzalo Medina (now deleted), which had an issue if some of the entries were negative.

What I really liked about that solution was its attempt to only require the specification of the basic information. In that solution, + signs were assumed, but adapting that to include - signs it would look like:

Note that no plus signs need be entered, just the raw matrix style data.

Here, I follow a similar approach but use the collcell package to analyze the data and handle the case of a leading - or + sign and properly align them. Although, I am not really sure why one would want a left aligned system of equations, since Gonzalo had provided such an environment, I have included that here as well. The parameters to the MySystem environment here are: 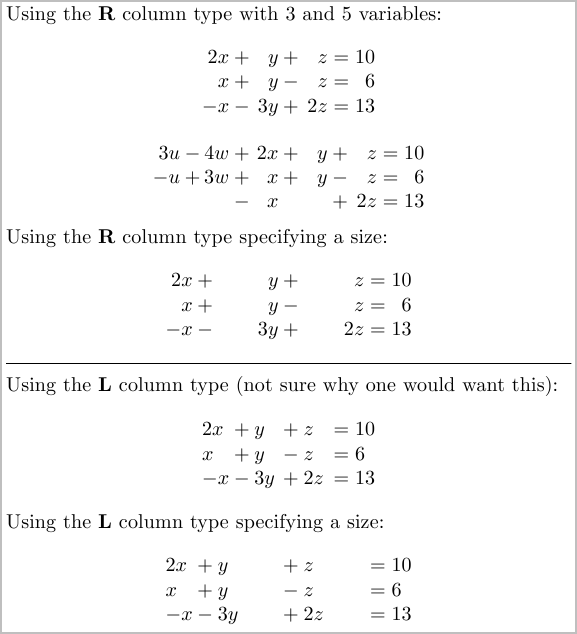 The following code, which takes your code as its starting point,

Relative to your code, the code above permits omitting 28 [!] $ symbols in each equation. This is made possible by (i) the use of the array environment (instead of the tabular environment), which operates in math mode, and (ii) the use of a custom-designed column type, o, to take care of the spacing around + and =.

Using the method employed in @Herbert's answer, this code can be simplified further with an array that uses half as many & symbols as the one above:

Addendum: I just noticed that you're also asking how one might go about changing the spacing between rows and setting the widths between the symbols on each row. First, changing the spacing between rows of an array is achieved by issuing the command \renewcommand\arraystretch{x}, where x should be a positive number. The default value is 1.0; setting x to 1.25, not surprisingly, will increase the distance between rows by 25%. Second, the horizontal space that surrounds operators of type "mathbin" (such as + and -) and "mathrel" (such as =) is controlled by the length variables \medmuskip and \thickmuskip. The default values of these variables are, respectively, 4mu plus 2mu minus 4mu and 5mu plus 5mu, where mu is short for "math unit" and generally equals 1/18em. The values of these length parameters may be changed with the \setlength and \addtolength commands.

Suppose, by way of example, that we were to issue the commands \renewcommand\arraystretch{1.2}, \addtolength\medmuskip{2mu} and \addtolength\thickmuskip{3mu}. The system of equations would then be typeset as:

Final comment: Because the \medmuskip and \thickmuskip parameters occur in plenty of places inside TeX's math commands, you should probably make any redefinitions of these two variables local to the system of equations. If you don't do so, you will probably encounter some rather odd-looking formulas elsewhere in your document! 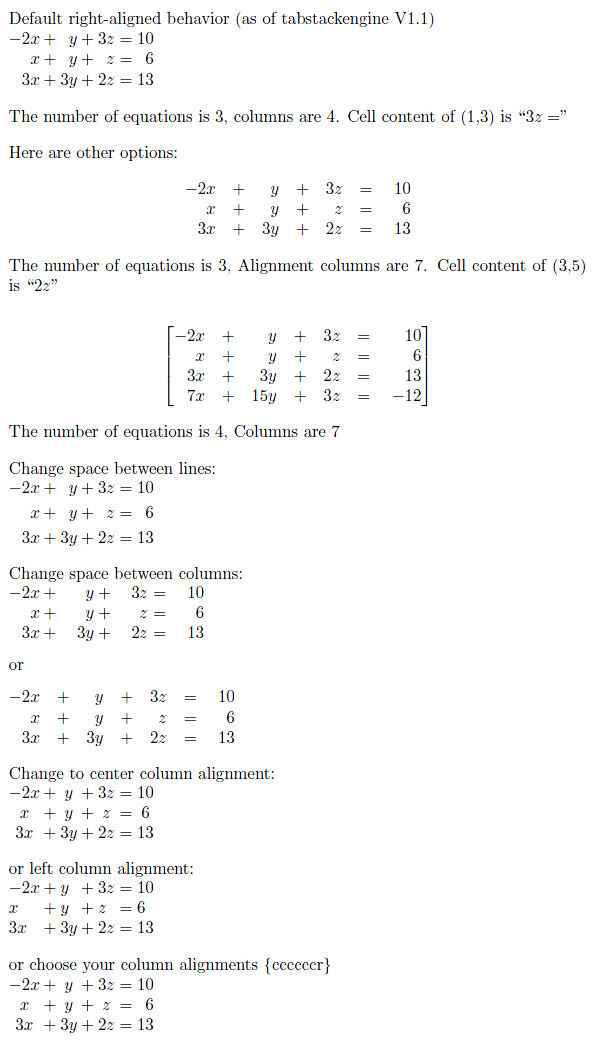 The second part of the bonus-giver's request can also be met, after a fashion. The tab character in tabstackengine can be reset to a blank space with \setstackTAB{ }. Because of the way LaTeX is parsed, a multiplicity of blanks is treated as a single space token. Thus, the following syntax would produce the same system of equations as the first item in the prior example. One, of course, must be careful about spaces, which could, however, require more discipline than the typing of & characters.

Not the answer you're looking for? Browse other questions tagged math-mode tables horizontal-alignment or ask your own question.

4
Aligning pieces of equations on the right
1
aligning equations in latex problem
1
Aligning linear systems of equations
23
Multicol layout for systems of (linear) equations
13
Alignment in math equations
13
Is there an environment that imitates align but displays `textstyle` math?
4
Aligning Systems of Equations
6
Defining repeated tabular/array columns using a computed value to specify the number
5
Putting a function into a new command with optional arguments
5
Unable to use systeme for a system of equations with \ldots and non-numeric coefficients
See more linked questions

10
Why are my Images not correctly centered?
4
Tabular and grid typesetting
3
Specifying vertical alignment in a table, column-by-column
4
Declaring array of integers
3
Problem aligning decimals in multi-column table
2
Use macro argument in \multicolumn column-specification
2
environment to balance a table in a multicol
0
Can you split a two-column article into further columns?
2
Control placement of text in tabular environment