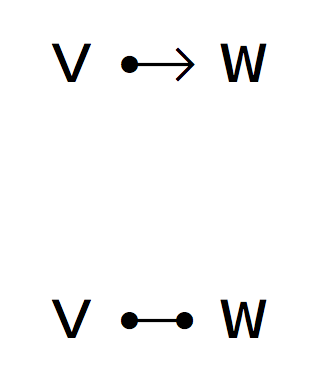 Suppose I wish to type some Mathematica pseudo-code and use these conventions rather than their "full form" (\[DirectedEdge] and \[UndirectedEdge]).

Then I can, somewhat, recreate these icons using tikz:

Where ue and de stand for undirected / directed edge respectively. While I would prefer to use edge and arc, arc is already taken in the namespace.

To be fair, using these symbols doesn't look like the worst thing ever seen when typeset:

Personally, I am in favor of these symbols rather than the explicit stating of an (un)ordered set of two vertices, and walks look ok-ish as well:

While these tikz drawings work in the given cases, I have noticed that in caption environments the symbols is no longer centered with the text. Further, spacing can be an issue.

How can the following be achieved?

Also, you opinion about using these glyphs in general would be appreciated. Be honest, how ugly are they?

You can combine some already existing symbols. For a relation you should put your definition in \mathrel to get the spacing right (if you prefer binary operation use \mathbin, there is a slight difference in spacing). The commands involve some spacing (\mkern) that you might have to change if you scale a lot. It seems to work for 10pt, 11pt and 12pt.

Not the answer you're looking for? Browse other questions tagged tikz-pgf math-mode graphics or ask your own question.

5
Looking for a symbol (arrow with dot)

30
LaTeX for Graph Theory?
17
TikZ: Drawing an arc from an intersection to an intersection
5
Graph theory notation
6
Problems with nested TikZpictures
3
Help in drawing a graph (graph theory)
0
Naming a Graph (Graph Theory)
0
draw custom edge with open arc in tikz-er
2
tikz tangent arc between two circles
1
How do I change the radius of circle in a node in tikz style?