change the origin of polar coordinates in tikz

I am using TikZ automata to draw a roted tree digraph. I'd like to use a \froeach loop at every node to build the next generation (in polar coordinates relative to tha actual node). Thus, it would be convenient to change the origin of the polar coordinate system before each loop. How can this be done?

Below is a MWE corresponding to the first generation:

I'd like to repeat the previous scheme at every (descendant) node. I have seen in related questions that one can use ++ to change the current reference point, bu t I don't see how to use it in my case.

After better understanding the OP goals, I think that the best approach would be to use some of the TikZ solutions for drawing graphs and tress, such as the algorithmic graph drawing introduced in latest TikZ version (this approach, however, requires to use LuaLaTeX to compile).

If you prefer to create the graph yourself using loops, the following example can be useful. It first creates the parent node and three children named p1, p2 and pk. The angles at which these children spawn from the parent are given as arguments, instead to be computed, to have finer control and avoid overlapping. However, in a more general case, I guess they should be computed depending on the number of children.

Once these nodes are in place, a loop iterates over the children names, and for each one it draws the edge with the parent, and creates a new subtree, using tikz calc to set the child as the new origin, as the expression ($(\p)+(\angle:1cm)$), in which \p is the name of the child and \angle a loop variable for the subtree. 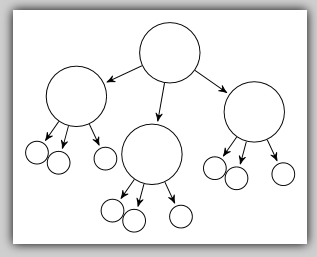 I hope the next MWE will give you some hint for solving your problem, since I'm not confident of having understood it completely.

This code simplifies your code in the computation of the angle at which each node is drawn, making unnecessary your counter \mycount and the use of TeX's counter arithmetic. I use instead TikZ loop counter and tikz arithmetic expressions.

In addition, I enclose the drawing of the little tree inside a tikz scope, which uses shift property to change the origin.

To demonstrate the result, I created an external loop which changes this origin placing it at four different locations and draws the little tree at each location. I added some red lines to help visualize the position of each new origin. 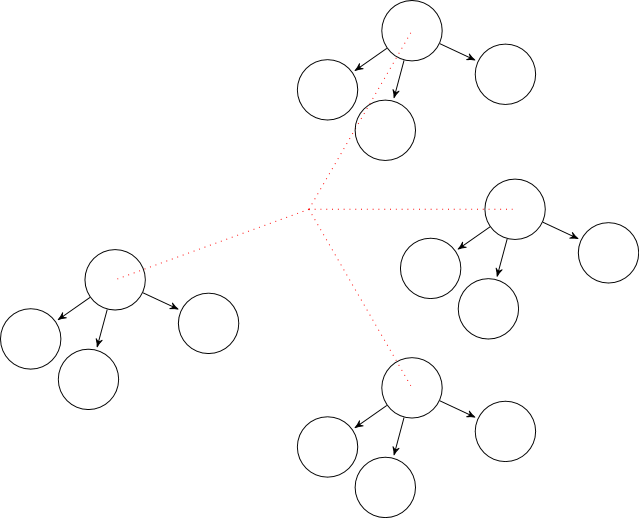 Not the answer you're looking for? Browse other questions tagged tikz-pgf polarplot or ask your own question.