I am trying to deal with an issue with rendering unicode characters (including combining characters) inside a verbatim environment. I am using xetex as my compilation engine. (For more context see this github issue).

I have found that the default lmtt does not seem to support β, â, or β̂ if they are encoded literally in a verbatim block.

I have discovered that Source Code Pro has support for these characters, but it seems to only be accessible from certain manners of loading it.

In particular, if I try to use

it successfully displays the characters, though the combining circumflex above the β fails to align properly.

Because I'm already using fontspec to get access to other unicode supporting fonts elsewhere, I'd prefer to use fontspec's utilities directly. But I find that when instead I use:

β's do not display (though the combining circumflexes do display).

Any insight as to why this occurs would be greatly appreciated. 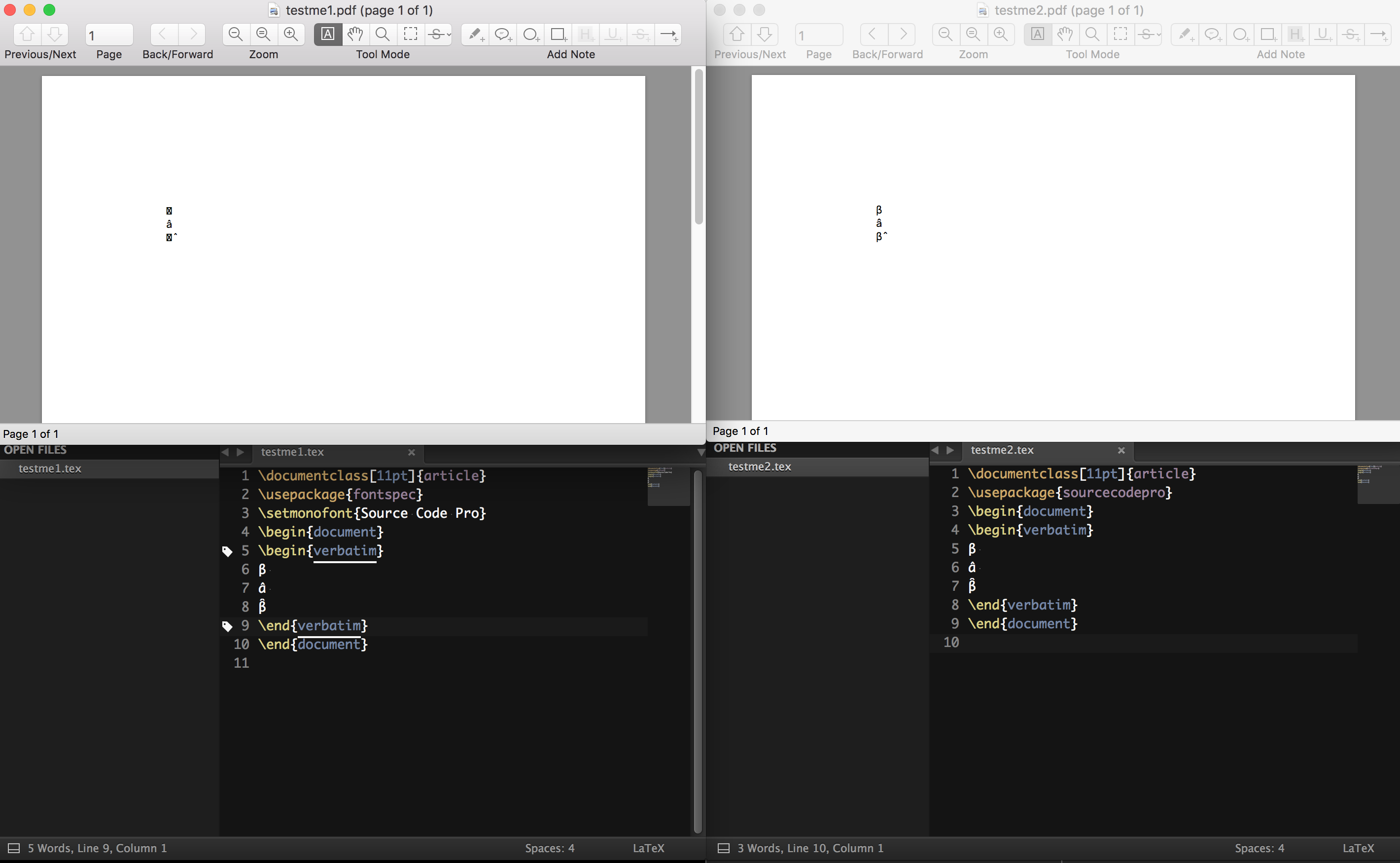 Per request: List files from testme1.tex (on the left)

The issue arises if you have a separately installed Source Code Pro (from Adobe Type Manager) as well as the Source Code Pro that you also have as part of the TeX distribution.

If you declare the font using \setmonofont and Source Code Pro it will find the Source Code Pro that is installed from the Adobe Type Manager, which appears to have inferior Unicode support in contrast to the TeX-included version.

If you want to explicitly specify the TeX version of Source Code Pro using fontspec, you will need to instead use the following declaration:

If you don't include the .otf it will attempt to load the ttf which may produce other problems.

However, that won't give you the same behaviour as just using \usepackage{sourcecodepro}.

The problem is that with that command, you only get the upright version of the font, meaning italics, bold and bold italics will not work.

If you want instead to replicate that font family coverage you would need to use:

where the star fills in with the value of the font, and the extension is specified by the Extension option.

If you wanted to fully replicate the behaviour of sourcecodepro (as included by default) you would need to specify a few more options:

which will then fully recreate the behaviour of \usepackage{sourcecodepro}.

If you are running into a similar problem for a different font, use the \XeTeXtracingfonts=1 and \listfiles commands in your document, and look at your *.log file associated with compiling your document.

A related helpful debugging trick, if you want to see what font is actually being used at any point in your document, you can use a trick from test current font:

and then wherever you want to see the current font, you include the command \showfont. It will display the font information in the document at that point.

Not the answer you're looking for? Browse other questions tagged fonts fontspec unicode verbatim or ask your own question.

25
How can I test for the current font?