In this question, which I posted a few weeks ago to TeX Stack Exchange, I asked how one should go about disabling specific ligatures (such as ff, fi, fl, and ffl) automatically for a list of pre-defined words. The answer I received was based on ConTeXt, which can access lua(tex) commands directly. In particular, the code that @Aditya came up with includes the commands

The ConTeXt command \usemodule is similar to the LaTeX command \usepackage. The \translateinput command provided by the translate module (which is contained in the file m-translate.mkiv) relies on the lua function resolvers.openers.helpers.textlineactions, which hooks into the function that luatex uses to read files. According to @Aditya,

no one has written similar functionality for lualatex. Perhaps, you could ask it as a separate question, and one of the lualatex experts will be able to answer with a solution.

Here, then, is my question: Can someone provide the lualatex equivalent of the following ConTeXt code (which may involve re-writing/adapting the translate module to lualatex):

(Note that while a 0-kern separator seems to be appropriate for the words shelfful and selfish typeset with CM, it's not quite adequate for the f-l and ff-l ligatures. However, I'll leave the question of how to define commands that allow for distinct kerning amounts for various combinations of ligated letters for a different, future question...)

This is more a proof-of-concept than a real bulletproof style file, but it does what you request:

and the test document (test.tex): 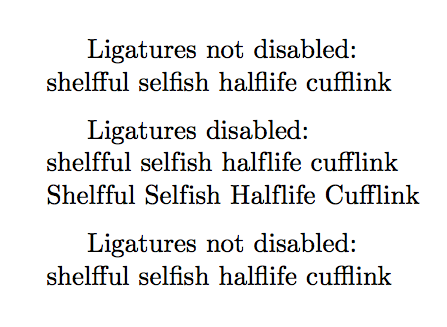 The basic functionality is part of luatex. For example, the following code (in luatex plain format) changes "hello" to "hi".

The ConTeXt code just provides syntax sugar so that you can easily define multiple translations. I tried to translate this code to lualatex but in lualatex I get an error

but I could not get the code to work with luatexbase.add_to_callback either.

The above plain TeX code shows that basic functionality is part of luatex and should be easily accessible in lualatex as well (once you figure out the appropriate renaming done by luacode package).

Not the answer you're looking for? Browse other questions tagged luatex context ligatures or ask your own question.

163
Contest: Show Off Your Skillz in TeX & Friends [TeX.sx birthday]
50
Can one (more or less) automatically suppress ligatures for certain words?
31
Any suggestions/requests for features for a new package that allows disabling ligatures for (pre)selected words?
21
How to suppress the operation of a luatex-defined macro on a string if the string is part of macro or a label
5
one character macros
31
Ligature suppression with proper hyphenation and comprehensive word list?
12
To kern double em-dashes
2
How can I invoke a macro inside minted inline code?

31
Any suggestions/requests for features for a new package that allows disabling ligatures for (pre)selected words?
8
Installing Lua Modules for use in LuaLaTeX - the sequel
21
How to suppress the operation of a luatex-defined macro on a string if the string is part of macro or a label
7
How do I know which ligatures are used in my document?
18
Can't generate ligatures with LuaLaTeX under MacTeX2014 and MacTeX2015 when using certain fonts
4
Is there something like chktex for ConTeXt?
34
What is "the" Lua root for context packages?
71
What are the incompatibilities of pdftex, xetex and luatex?
2
ConTeXt: What is the equivalent of process_input_buffer callback?