I'm using the Arev font for text and math in my document. Everything works fine, except for the "µ". I coudn't find a solution to get an upright and sans-serif µ in my document. This is my MWE:

And this is how the result looks like with PdfLaTeX:

It seems to me that your problem stems from the fact that the arev package implements lowercase greek as italic only without providing any upright alternatives. Arev itself as a typeface does have upright lowercase greek glyphs available: http://tavmjong.free.fr/FONTS/

Adding to that, the µ character that many keyboards have is not the greek mu, it is the micro* symbol, which the arev package also sets in italic (which it never should be. A greek mu is useful as italic and upright, the micro symbol as unit prefix should always be used upright anyway...)

If you can, switching to XeLaTeX would allow to use typefaces that are installed on the computer, which would give you access to the upright greek of Arev. In pdfLaTeX, another hacky solution would be to get the greek mu glyph from a Arev sample PDF and insert it as a vector graphic. Maybe someone else has an easier way though.

The micro symbol, e.g. for microhenry µH, is based on the greek mu, but is an independent unicode character. In some fonts, they look slightly different: 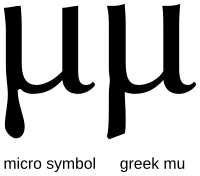 (this is set in Linux Libertine)

Insert both micro and mu (µμ) here to check yourself.

Finally, this comment by timothymctim (Siunitx's \micro symbol has serif) proposed to use phv (Adobe Helvetica), which looks acceptable to me: 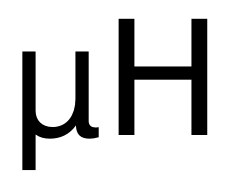 This MWE will typeset the correct micro symbol (µ) instead of the greek letter mu. For an example of siunitx's different ...-micro-settings, see this answer.

Note that I changed inputenc's [utf8x] to [utf8], because [utf8x] changes the keyboard µ micro symbol to a italic greek mu ...

Thanks for your comment! Finally I managed to get an upright µ in Arev by unslanting the µ like recommended here: 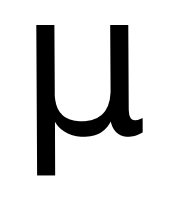 It is quite ridiculous how much pain it is to display a character that even every HTML browser can render.

Not the answer you're looking for? Browse other questions tagged greek arev or ask your own question.

45
Typeset mathematical symbols also in sans serif font?
22
Upright Greek font fitting to Computer Modern
5
Siunitx's \micro symbol has serif
8
charter and siunitx: either the kerning is bad, or the micro doesn't follow the surrounding text shape. What can I do?
4
Sans serif upright greek in math mode
3
Why does utf8x with inputenc change the micro symbol µ to greek mu?