Is there a replacement for Times Roman that has Unicode math symbols and Greek letters?

Another program (pandoc) is generating .tex files that are loaded with Unicode math symbols and Greek letters. I am successfully using those files with xelatex, but with the default fonts, it is hard to get math symbols and subscripts. The only "mainstream" serif font I have found that supports all these symbols is DejaVu Serif. But it looks very different from the Times New Roman that I have been using for all my other documents.

Is there another font, more closely approximating Times New Roman, that has extensive Unicode support? I have tried Tinos and Liberation Serif with no luck.

Here is a minimal non-working example:

With STIX, I get the math symbol, but not the Unicode subscripts. What font can do both, and looks mostly like Times Roman?

STIX Two Math has (almost) full coverage for upright text; you can use it together with the STIX Two Text fonts.

Math specific characters are of course missing from the Text fonts. 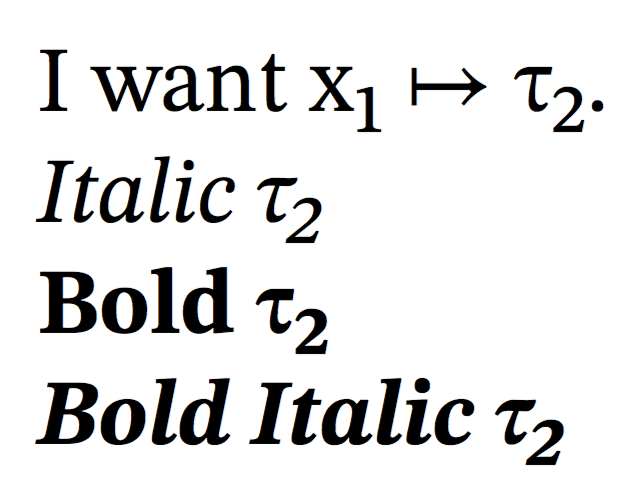 Stix2 has separate text and math fonts, but the math font may be enough:

Not the answer you're looking for? Browse other questions tagged fonts xetex unicode or ask your own question.