So I'm making a table with chemfig figures in a particular row. I want these figures to be centered vertically. I tried the answers in this answer, which seemed to work fine. However, I wanted some cell padding as well. That's why I tried the command \renewcommand{\arraystretch}{2} from this answer. However, unfortunately it doesn't seem like this extends to chemfig diagrams.

Then I tried manually adding spaces before and after the table rows and tried centering them that way. This was kind of strange (I had to use negative spaces because sometimes I needed a space before the horizontal line and sometimes afterwards). However, in the fifth row, there appears to be some sort of a space which carries on to other columns as well.

Is there any way I can fix this problem? My MWE is here: 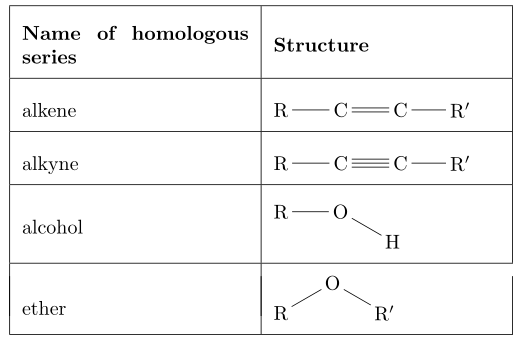 never use \\ after \hline (the cause of your broken vertical rule) but here I'd use booktabs and its horizontal rules with customisable space. 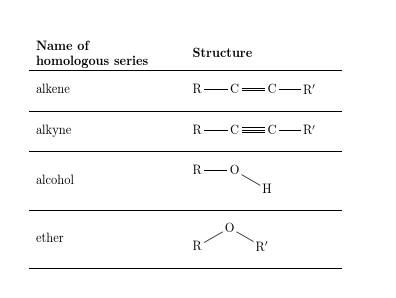 Not the answer you're looking for? Browse other questions tagged tables vertical-alignment chemfig or ask your own question.

316
Column and row padding in tables
139
How to vertically-center the text of the cells?
1
More row space for chemfig in longtable