I am using the circuits.ee.IEC library. However, I cannot find any fuse symbol like this:

How can I define such a symbol using circuit declare symbol? It should be just combining the resistor symbol and a line in some way, but I don't understand the syntax well enough to do this.

A different approach would be to append code after the resistor node, similar to the light emitting and direction info styles:

You can use annotations as described in the TikZ/PGF manual in Section 29.2.5 Declaring and Using Annotations to add the horizontal line over the symbol:

Annotations are quite similar to info labels. The main difference is that they generally cause something to be drawn by default rather than some text to be added (although an annotation might also add some text).

Here is an example of resistor and the fuse that you want: 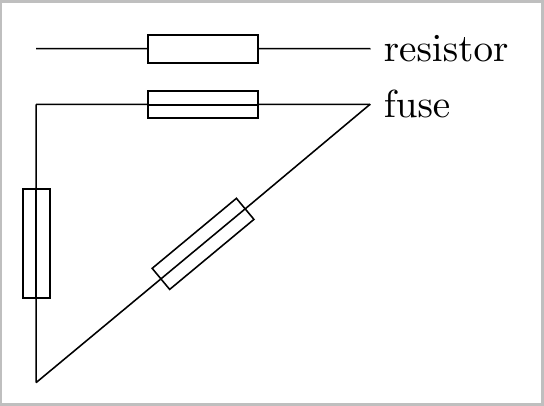