The operation ^ (i.e. e^x) is not working properly. When I write ^ Texmaker sometimes stops working.

I am using a MacBook if this has any influence. 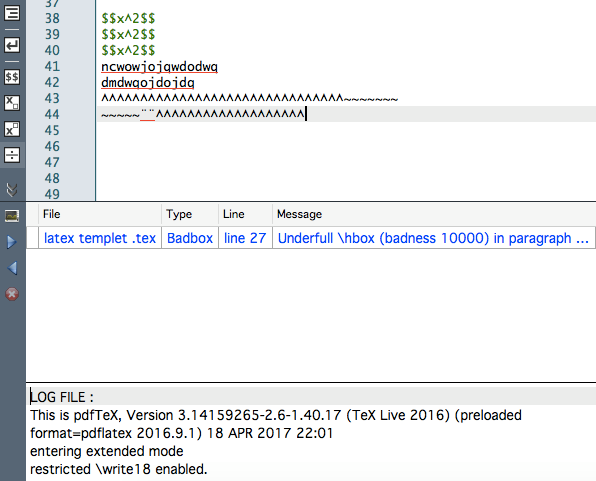 So now it froze. Can't do anything. Can't delete, can't mark the text and can't print the PDF. I can 'Save as' to continue, but AFAIK that's it.

This is the document where it freezes sometimes when I use '^'. This is the code:

^ is a math mode command for a superscript and ^^ is a general command (like the control key) to shift the character code of the following character by 64.

so in text mode with one ^

you get the error

you get no error, and it typesets an M as end of line is control-M so shifting that by 64 gives M

you get the error

as control-^ (character hex 1E, decimal 30) isn't set up as an input character.

Adding more ^ will just give multiple occurrences of these errors unless you stop at the first one.

As the example in the question has been changed I will repeat the above but with math mode.

In display math with one ^

As the end of display math is taken inside the superscript and TeX's grouping is messed up.

as in text mode as control-^ is set as an invalid control character.

As in text mode if you add more than three ^ you just get repeats of this behaviour.

^ Is a character with many purposes in TeX systems. For the normal usages:

In order to use it to print an exponent you:

In order to print a hat over your letter (like ê) you should use either:

Single ^ characters are not valid during LaTeX inputs (normally) hence the errors. 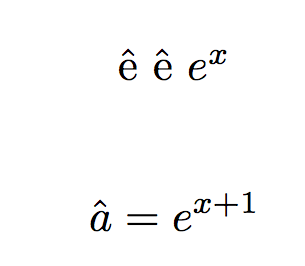 When ^ is followed by another ^ and:

then the whole trio/quartet gets replaced by a single character. with the rules found in the TeX Book, chapter 8. (In the millennium edition is pages 46-7)

Not the answer you're looking for? Browse other questions tagged errors texmaker or ask your own question.

20
Texmaker Error “File not found”
5
TeXMaker shows errors after compilation for deleted lines
2
After a mistake in Texmaker, it has to be restarted
6
TexMaker: Hide message/log file after quick build
0
Texmaker freezes when iterating over an array and plotting with pgfplots
1
Texmaker: PDF does not update after compiling