How to set distance between nodes in TikZ

I'm trying to draw a web graph for a paper, using TikZ to draw the individual pages as nodes. When I typeset, however, the graph sits in one small corner of the line, and the nodes are too close together. node distance doesn't work, and minimum size just expands the nodes such that they overlap each other. How can I set the minimum distance between the nodes? Thanks.

The unfinished (no lines yet) graph looks like this:

Ideally, it should be the width of the page and the nodes should be distributed farther away from each other.

The tikzpicture environment only takes one optional argument. I.e., if LaTeX sees a [ after \begin{tikzpicture}, it grabs everything up to the first ] it sees, and that is the options for the environment. When you have \begin{tikzpicture}[..][..], the second bracket pair is actually just read as normal text I think, and TiKZ generally tries to suppress anything that isn't a pgf/TikZ command, so it is basically ignored.

So in summary, all the options for a tikzpicture has to be placed in the same bracket pair.

If you change your code accordingly (and remove the misplaced ? after stealth), you will find that your node distance setting works as expected.

That said, you might want to follow TeXnicians advice to use the positioning library, and say e.g. right=of instead of right of=. Some discussion on this is found in Difference between "right of=" and "right=of" in PGF/TikZ. Another reason for using the positioning library is that you can set the horizontal and vertical node distances separately, by writing node distance=Ycm and Xcm, an example is seen in the code below. As gernot mentions in a comment, in that case one would probably also want to add on grid to the node style. on grid means that the distances are calculated from the center point of the nodes.

Final note: you can put one style inside another, so if dangling node has the same style as node, with the addition of the fill, then you can say dangling node/.style={node,fill=black!30}. This reduces code duplication, and makes it easier to modify. 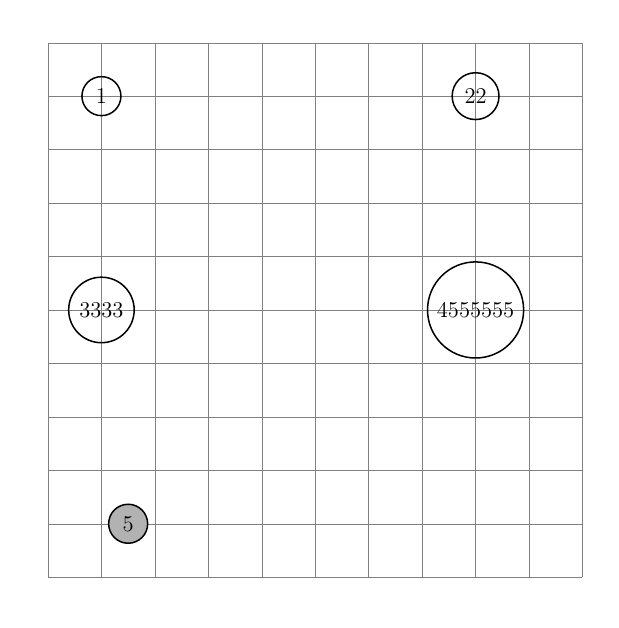 9
Can I calculate the difference between two relatively positioned nodes with TikZ using calc?
21
How to define the default vertical distance between nodes?
17
Numerical conditional within tikz keys?
18
TikZ: Drawing an arc from an intersection to an intersection
12
Drawing rectilinear curves in Tikz, aka an Etch-a-Sketch drawing
3
Arrow between BTrees
2
How do I change the radius of circle in a node in tikz style?
3
Document header with tikz