How to fix the warning: No hyphenation patterns were preloaded for (babel) the language `Portuguese'?

I am on Windows using this MikTexversion:

When I am compiling it, I am getting this boring warning:

This is my minimal example to trigger this issue:

I spend hours searching and instaling a lots of stuff hope to get ride of it, but it just does not go away. Here I am listing all packages I got installed by the command mpm --list and getting all the lines with i:

To compile it I am using the plugin LaTeX Tools for Sublime Text.

But when I use directly the command line:

I got the following error:

How to fix this error? I am missing some package which is not installed?

This is image I got from the mo.exe latex program. It seems to have everything in place: 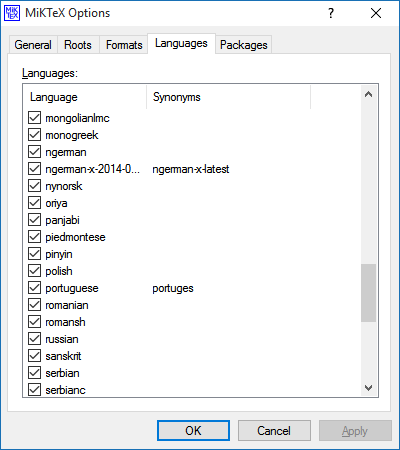 Although the question already has an accepted answer, I feel the urge to provide a solution which does not depend on luck with the update, for this did not work for me.

I had the same problem with German hyphenation and was eventually able to solve it. Maybe this helps future users to solve their problem.

⯈ Check with MiKTeX Console (or similar) if the language is installed (Settings > Languages). For me, it was not. It showed ngerman and ngerman-x-2019-04-04 with loader and package names, but did not state that those were installed. I wonder why. Not any of the languages was installed.

⯈ If the language is not installed, install hyph-utf8 and dehyph-exptl or whatever file is mentioned for your language. Restart MiKTeX Console and verifiy that there is a check mark at both 'ngerman' rows.

⯈ (Obsolete if step 4 will be performed as well) (Re?)create the formats using initexmf --dump=pdflatex which will create/update %localappdata%\MiKTeX\2.9\miktex\data\le\pdftex\pdflatex.fmt. You may omit the =pdflatex to let initex create all format files.

Weird: I could not find folders for any other key containing the corresponding format files. Apparently, my appumption was invalid and the installation of a language file does not trigger re-creation of the format files.

⯈ Fix (?) this with initexmf --mklangs which fills those files with content:

and the referenced file dehyphn-x-2019-04-04.tex existed and had some probably useful content.

Thanks @Bernard I updated my MikTex installation now I am not noticing this warning anymore:

This is my recent compilation output, where I cannot notice anymore that warning:

This fixed it for me:

Not the answer you're looking for? Browse other questions tagged pdftex miktex hyphenation or ask your own question.

3
How to disable the Overfull \hbox too wide warning for my table?
6
Language (hyphenation patterns) not available