I'm trying to create an arrow that goes out from the bottom of a word, and then loops around to the top of that same word. The point is to illustrate that the output of "Operations" also becomes the input of "Operations". 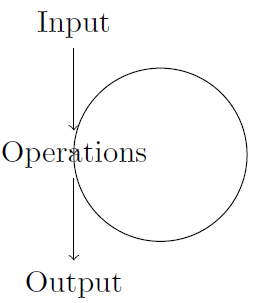 Here a very grob solution by adding a third node \node at (1,0) (here) {}; and modifiyng the arrow's size by looseness. 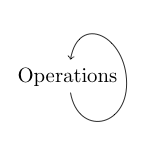 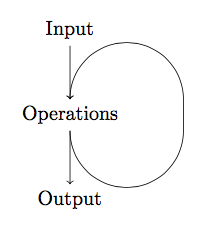 10
Rotate a node but not its content: the case of the ellipse decoration
12
Numerical conditional within tikz keys?
8
tikz-cd Extra arrow tip with start anchor on edge v0.9b
7
Why do I get an extra white page before my TikZ picture?
13
TikZ: Drawing an arc from an intersection to an intersection
12
Drawing rectilinear curves in Tikz, aka an Etch-a-Sketch drawing
9
Line up nested tikz enviroments or how to get rid of them
3
How to draw a square and its diagonals with arrows?
1
Arrow style with fill colour and edge width