Where's an example of the bad typesetting that inspired TeX?

Where online can I see a side-by-side comparison of the "good" typesetting of a page of TAOCP that Knuth liked in 1968 versus the equivalent "bad" second edition from 1976 that Knuth hated and caused him to create TeX?

(I don't have good-quality images, so as it stands this answer may be more misleading than helpful. Will need to replace with proper images.)

The short answer is that you can find a (brief) comparison in Chapter 1 of the book Digital Typography. This chapter is a cleaned-up version of his Kyoto Prize Lecture. And to cut to the chase, here's something that Knuth found unacceptable: does it look unacceptable to you? :-)

Personal story: I had exactly the same question a few months ago. One of the best things about living in California is that one can get to see Prof. Knuth at one of his rare public appearances. In September 2016, DEK gave a talk at the San Francisco Public Library called 32 Years of METAFONT (Youtube, Vimeo, slides). After the talk (including Q&A) was done and many people had left, I overcame my shyness, approached Prof. Knuth, and asked him whether the bad galley proofs he got had been published anywhere. He said no, but they were in the Stanford archives. I said it would be nice to see side-by-side the first edition, the bad galley proofs that led him to his project, and the second edition typeset with TeX+METAFONT. He said “maybe someday”.

But see below for what little has been published.

As a college student, Knuth had read textbooks published by Addison-Wesley (like Thomas' Calculus) and liked their typesetting. He has said that he chose them as a publisher partly for this reason. The first volume of The Art of Computer Programming was published in 1968, Volume 2 in 1969, and Volume 3 in 1973. All of these were produced with hot-metal typesetting on a Monotype system: the letter shapes were made with physical pieces of metal.

Here is a page from the first edition of Volume 2, Section 4.2.1 (Floating Point Arithmetic: Single-Precision Calculations). (Note: The two images below are supposed to show the same thing; the first is from a scan I made from Digital Typography and the second from the Kyoto Prize lecture PDF.) 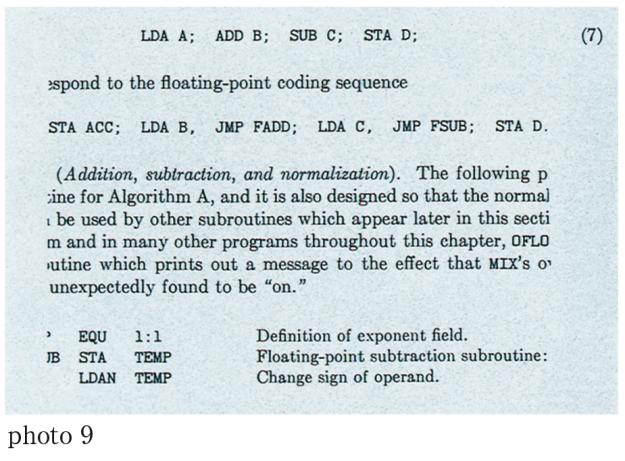 But the printing world was moving away from this technology. When it came time to make a second edition of Volume 2, the publishers wanted to use phototypesetting: the letter shapes were made using light and lenses. The first galley proof (in 1976) did not even attempt to match the look of Volume 1. This one is not available anywhere except in the Stanford archives.

The second attempt, the best that the publishers could achieve with phototypesetting (after months of effort to have new fonts match the old ones), was "much improved", and looked something like this: 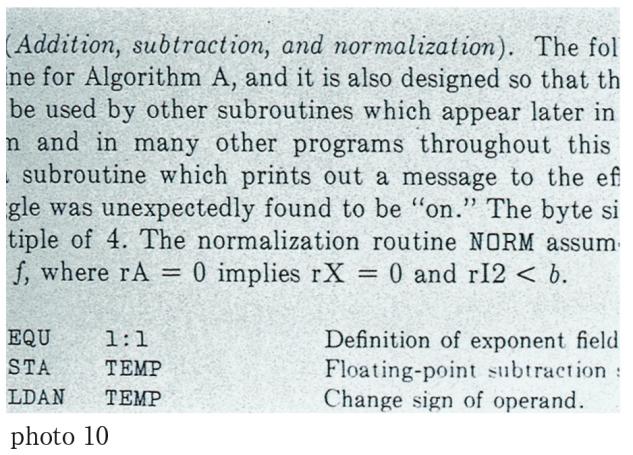 Knuth still found this unacceptable: unhappy about things like the N in "NORM", the "ff" ligature in "effect", and the letters "ip" in "multiple" being too close together.

I didn't know what to do. I had spent 15 years writing those books, but if they were going to look awful I didn't want to write any more.

There was a new technology on the horizon: digital typesetting, where the letters were not "analog" (like with the pieces of metal, or light projected through film) but were made of 0s and 1s (pixels). Because of the low resolution at the time (180 dpi for instance), it had so far not been taken seriously by many as a means of actually producing professional books, but in February 1977 Knuth came across the book Artificial Intelligence by Patrick Winston that had been produced with digital typesetting (at 1000 dpi), and it looked just like a “real” book. Knuth realized that digital typesetting had grown up, so (as a computer scientist) he could solve his problem and produce his book the way he wanted. He told his publishers in March 1977 that he would have the first proofs ready in July.

It took a bit longer than that.

Here's output from the Xerox Graphics Printer at Stanford, from late 1978: 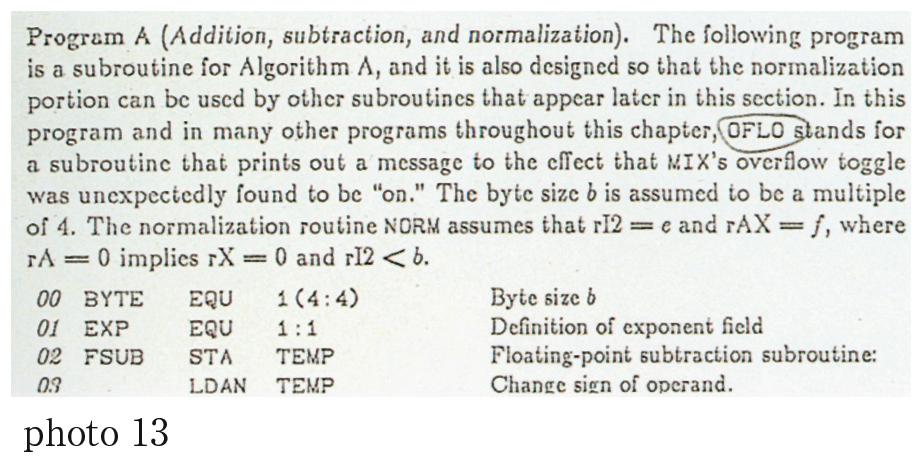 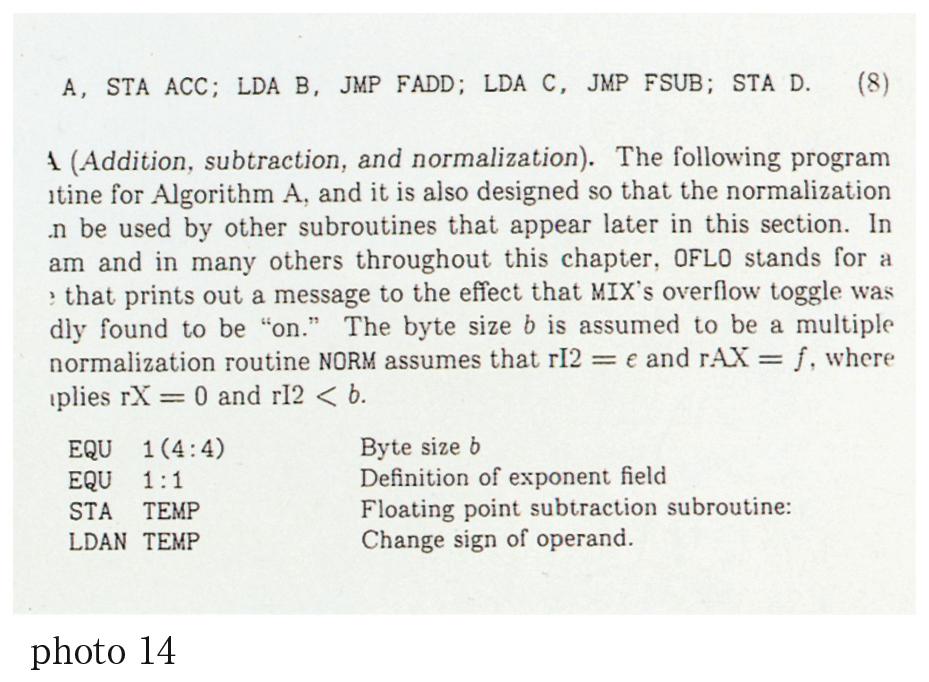 The story does not end here:

But when I received the first printed copy of the new Volume 2 in its familiar binding, and opened the pages, I burned with disappointment. The book did not look at all as I had hoped. […] The published second edition didn't look much better than the version I had rejected before starting my typography project.

So he continued to improve the fonts even after the second edition was printed in 1981, with the help of leading font designers (Knuth has worked with Hermann Zapf, Charles Bigelow, and Richard Southall, among others).

Here's how the same section looks in the PDF ebook of The Art of Computer Programming:

(IMO the PDF is great for on-screen viewing but it doesn't look as good in print, as I said in my answer here.)

A minor (or major?) point of note: the poor typography that drove DEK was not really “bad typesetting” per se: it was the fonts that were bad; the typesetting was okayish. He wanted to create digital fonts, and to use these fonts and specify his books' appearance himself, he needed to create TeX. (Additionally, the idea was already brewing in his head that computers could find better line breaks: see the paper Breaking Paragraphs into Lines with his student Michael Plass, printed as Chapter 3 of Digital Typography.)

Honestly, the example cited by Knuth in his Kyoto lecture seems near-perfect to me, although clearly it's a cropped image (he mentions poor spacing on the word 'multiple' which isn't in frame) so maybe there are defects we can't see. In fact, I like it better than his early TeX output print since that doesn't have proper italics.

I do wonder if at the time he was thinking about the quality of other mathematics printing not just his own book-he mentions in his lecture that his publishers were attentive to his concerns, and did make the best effort they could. A lot of maths 'printing' in this period was really just photocopied typewriter printouts. See this paper. It's a single-size monospace font all the way through, letters that need to be large like 􏰠􏰠Π have had to be hand-written in, there's no italics so letters have been underlined to emphasise them, and then the whole thing was just photocopied and printed in a book. It's ghastly; it might have been appropriate for a lecture handout but there it is printed in a journal. Personally, I feel like that's more the kind of thing that justified inventing TeX than his own issues with publishers.

Not the answer you're looking for? Browse other questions tagged tex-history knuth or ask your own question.

77
Why is LaTeX free?
32
Are the original CM fonts better than the current type1 fonts?
7
History of Writing Mathematical Texts

138
How was TeX output visualised on screen, back in the day?
65
Typesetting before TeX and computers?
33
Where does the name "TeX" come from?
14
Translation of typefaces into METAFONT (in the case of AMS Euler and others)
5
First printed TeX example program?
6
To what extent is the TeX typesetting/layout engine coupled to the macro system?
14
Is NTS (New Typesetting System) (the Java implementation of TeX) usable today?
10
What tools/advice/methods should I utlize to practice "The TeXbook by Donald Knuth"?
38
Why did Donald Knuth create TeX?