TikZ: Expand width of each picture to given size

I create plots with pgf/TikZ, externalize them and then they will be included into another predefined LaTeX-document (which someone else will do, so I can't change anything there). That final document has a two-column layout and all images will be scaled to a width of 80mm (= 1 column width).

When I create a TikZ-picture and externalize it, the resulting pdf is nicely cropped. However, in my case I need all my pictures to have a width of exactly 80mm. I do not want to scale the pictures, but center each of them on a 80mm-wide canvas.

I came up with a solution using the bounding box of the current picture and enlarging it to my needs. Here's an example: 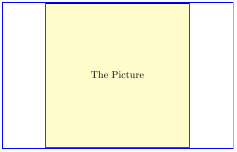 So this works as it should, but is there a more elegant way to do this?

I think that's quite a good approach. Minor suggestions for simplifying the code:

Also, you don't have to define the coordinates first and then define a rectangle between them to get the correct bounding box. Instead, you can just specify a path between the two points directly:

Not the answer you're looking for? Browse other questions tagged tikz-pgf two-column bounding-box or ask your own question.

10
Rotate a node but not its content: the case of the ellipse decoration
2
how to set the canvas and font size in TikZ?
11
How to define the default vertical distance between nodes?
1
Define tikz node based on pagenodes
11
Multi-line box around a sentence in a paragraph
12
Numerical conditional within tikz keys?
7
Help understanding the coordinate system used in tikz
1
Tikz externalize and placing a caption overlapping with a picture
9
Line up nested tikz enviroments or how to get rid of them
1
Creating a Tikz-Picture with respect to paper width