Draw a horizontal line in latex

How can I draw this horizontal line like this picture in Latex? Thanks for your help.

I see two choices, one using \rule (as suggested by @John Kormylo) and one using \hrule. I'll describe them both and give an example at the end

The \rule command constructs a box, which is treated like a character and has the following syntax \rule[h]{w}{t} where h w and t are lengths and represent respectively:

should do the trick.

The \hrule command is a TeX primitive and is a bit more complicated to use because it suppresses the interline spacing. Its full syntax is as follows:

where h, d and w should be substituted with the appropriate lengths (height is the thickness of the rule). Any order of height depth and width are supported, and any or all of them can be left out, which will make TeX use the following defaults:

Usually hrule is to be used between paragraphs, otherwise it will start or stop a paragraph. The \relax is not always needed, but it prevents the misinterpretation of following words and numbers when there is ambiguity

Note sometimes it's useful to use \vspace before or after the \hrule to space it from the previous and next paragraphs. In this case I don't know the specifics of the problem to determine the proper spacing of the rule suitable for you.

Example (the \vspaces are random) 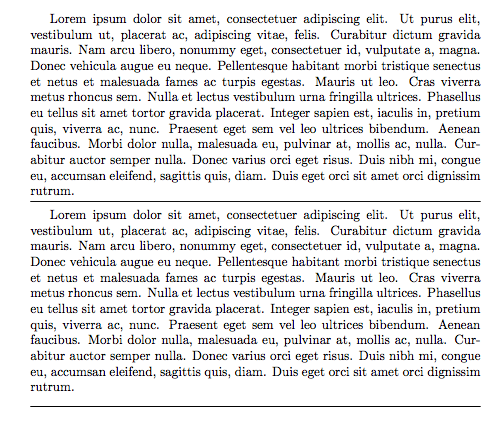 Not the answer you're looking for? Browse other questions tagged rules or ask your own question.