Intelligent use of labels and newcounter

In a document I am tracking a list of tasks. Lets call them A (Task 1), B (Task 2), and C (Task 3). I'm trying to create a command \mytask that will let me add the task based on a label, and other arguments that will be added to the document command as this evolves.

As I add tasks, I want to be able to reference them and determine their status as either New, or Continuing. Right now, I'm trying to distinguish between their states with \@ifundefined{r@#1} and the labels Defined and Undefined.

I'm surprised to see, that when I include \refstepcounter{task}\label{#1}% in the command, that I get really weird numbering, and the iflabelexists logic doesn't seem to be sensitive to the placement of the \label command.

While I somewhat expected the numbers to be a little staggered because IO but the \refstepcounter after the titles that show what the task number is, I wasn't expecting the A to be a larger number than the B. Additionally, I expcet the Status (Defined or undefined) to be:

I can't explain the why any use of refstepcounter toggles the ifundefined flag, but I'm guessing that logic of

failing has something to do with the multiple runs of the compiler that Tex needs... Originally I thought my TOC was toggling the first use of the labels, but I think I've got a bigger problem.

Is there a dynamic way to work with custom counters like this?

you're using will not do what you aim for.

You have to define your own macro for this. 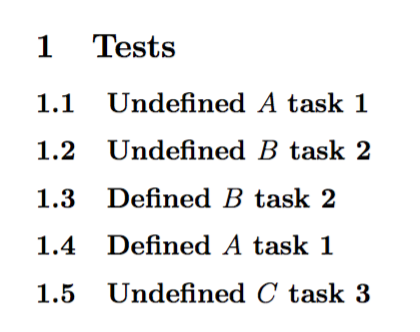 Not the answer you're looking for? Browse other questions tagged macros counters or ask your own question.

7
Using \total of totcount package in section title
6
Correct usage of the LaTeX \newcounter and associated commands?
3
Save value of dynamical counters
2
Counter in section title, table of contents increases it
1
Repeating labels of custom environment
2
Continuous Counter for Figures
1
Counter reset for numbering the figure
3
Temporarily modify the way a counter is displayed in an existing environment
1
Testing the existence of a counter fails inexplicably
3
Non integer number in setcounter (report document): \setcounter{figure}{1.14}