The spacing between the 3rd and 4th stars is non-existent. Anyone know what's up? 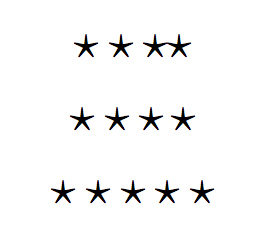 Math symbols have different classifications and \star like - is a classed as binary operator. TeX assigns different space between symbols of each type, but also binary operators if not appearing in "infix" position, essentially revert to being an ordinary operator \mathord rather than \mathbin).

The motivation here can be seen better with -

1-2 the - is spaced as an infix operator but when not used between two symbols it reverts to closer spacing for -2.

When you have one or two - they are ordinary symbols with no space, but if you have three then the middle one acquires its natural mathbin spacing. Then the fourth, being between the third (which is a mathord) and the end of the math list, is again mathord so gets no space. 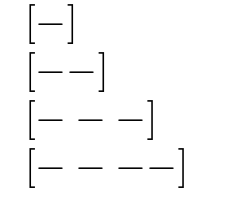 6
wrong distribution of an even number of dots
2
Three stars or asterisks
18
What's the right space to right the alignment of a right aligned align environment?

6
Converting all numbers in document to set number of decimal places
5
Using mathspec to change digits font in math mode isn't working
6
Libertine fonts: spaces in PDF files
2
Balancing vertical spacing between images or boxes in a page
5
Reduce the spacing between paragraphs
5
How continue an equation next line
1
Paragraph spacing in \documentclass{article} with Figure and Listings
0
Align all text in bullet