But there should be no kerning at all! First for “theoretical” reasons: kerning should indeed only occur between the letters of the same word; and actually this is a way to make the difference between a multi-letter variable like \mathit{length} and a product of single-letter variables. (Also, you can use some negative space to make the difference between an infinitesimal variation of function g d\mspace{-1.5mu}g and the product of the variable d by the variable g d g, again using the fact that there is no kerning between two variables multiplied by each other).

This also causes a problem is practice, because all the other pairs of letters have no kerning! And for non-CM fonts, there is never any kerning at all between mathematical single-letters variables either!

See a few examples below: 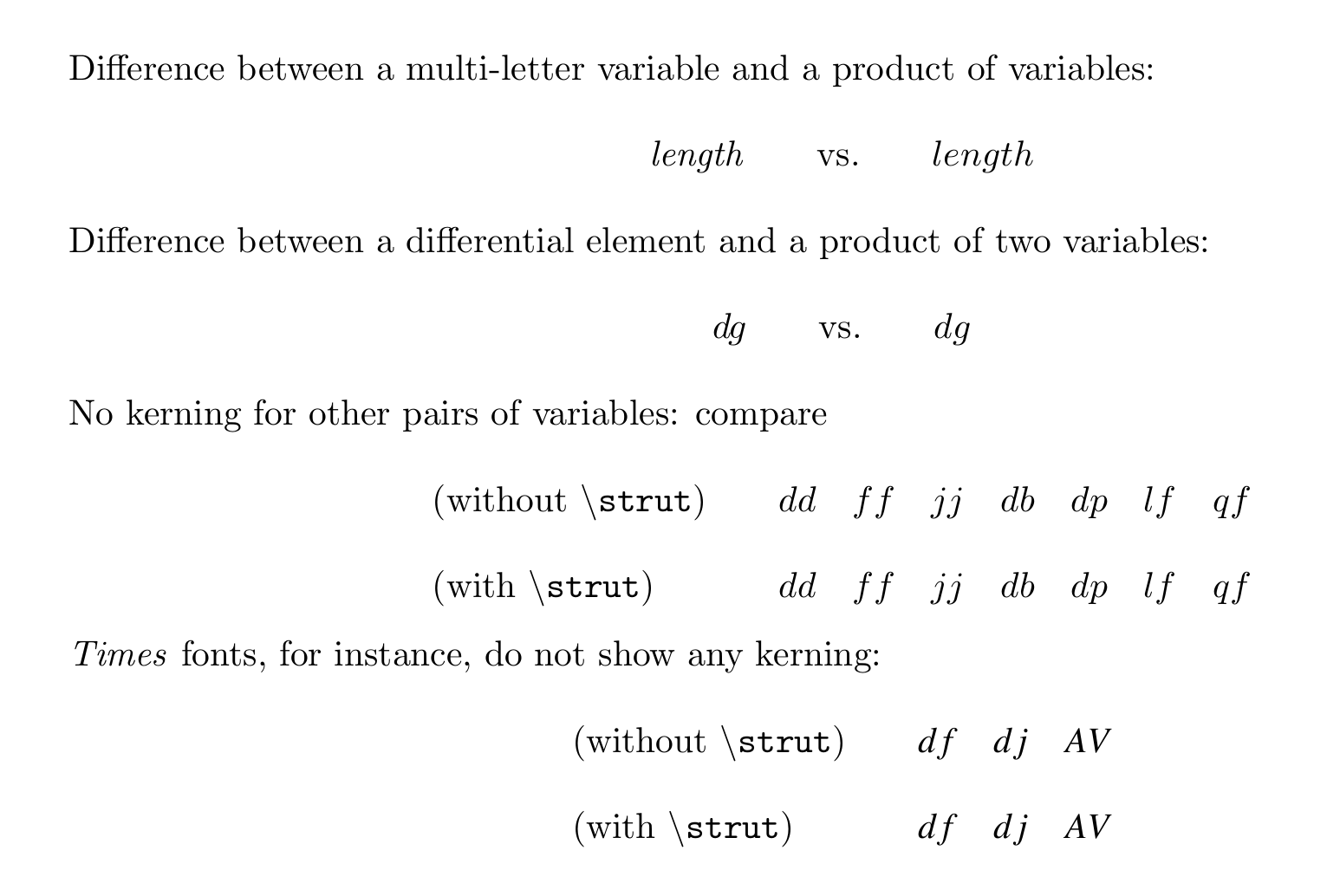 You can use microtype to remove the ligatures and the kerning for this encoding:

there is kerning between d and a following letter in math mode because don knuth believes that is the way $df$ and similar differential expressions should appear in print. he is adhering to long-standing practice in math publishing, at least in the u.s.

barbara beeton has explained why the “d” is kerned with the following letter. If you're fussy it shouldn't, define your own macro:

Your preference seems to go to \sdiff (that you can call as you like). 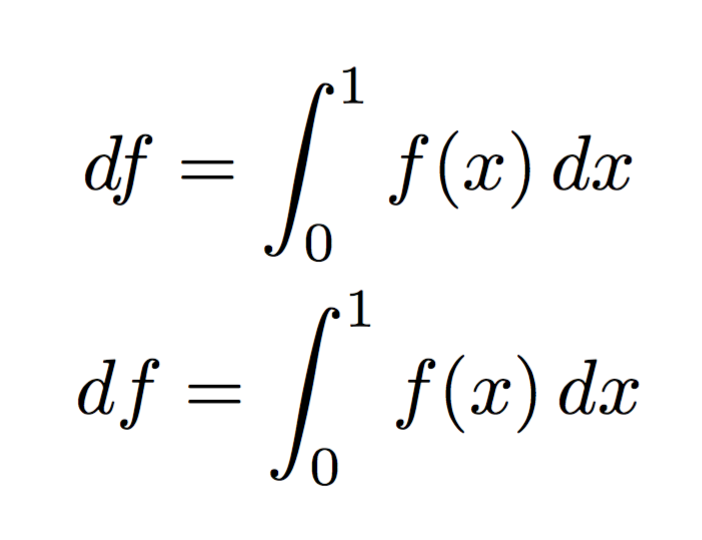 I couldn’t resist adding the fussy details, just in case somebody’s interested in them.

Yes, TeX does execute the ligature programs of a font even when that font is used in math mode: this is explained in Appendix G of the TeXbook (a part of that work that has been receiving uncommon attention, lately! :-) , more precisely in Rule 14. Paraphrasing this rule, ligatures are formed from, and kerns are inserted between, two consecutive characters when the characters in question appear as nuclei of a pair of atoms, in such a way that all of the following conditions are met:

Note that condition 4 implies that the two characters are actually taken from the same font, because, besides being from the same family, they also are in the same size, given the fact that a style change cannot intervene; let’s call this font the font of the pair.

Whenever a pair satisfying the above condition is found, the following things happen:

From this description it follows that, in order to inhibit the kerning, it is (necessary and) sufficient to insert between the two atoms “something” that prevents TeX from recognizing the pair: this could be, among other possibilities, an empty atom, as in d{}f, or a zero-width rule, as in d\strut f, or a zero-width kern, as in d\/f (indeed, in math mode the \/ command always inserts a kern of width zero, see The TeXbook, p. 292). Of these three idioms, the last one (d\/f) is the most efficient.

It should be noted, however, that the insertion of this “something” can also have side effects, as hinted above, on the italic correction that follows the first character (see Rule 17). Now, in general, in math mode the italic correction interacts with the horizontal placement of superscripts in a way that is not necessary to explain here, because, here, we are only concerned with sheer “unscripted” symbols; and in this case, the rules boils down to the following simple criteria:

Recall that a “mathematical” font is a font whose \fontdimen 2 parameter (natural length of the interword space) is zero: TeX uses this value to denote fonts that are meant to be used for mathematical variables. Thus we see that, for a “non-mathematical” font, the suppression of the kerning between two characters entails as well the suppression of the italic correction after the first one; of course, this is what one usually wants, but it should be noted that the two effects are bound together, independently of the means used to trigger them: in math, V{}A and V\/A yield exactly the same result, whereas in text they don’t.

The following small program can be used to check some of the facts mentioned above:

It is true that the cmmi10 font defines nearly no kerning pairs among its characters, the most notable exception being, indeed, the d character (there are a few other defined pairs, however, most of which deal with the correct spacing of punctuation). Let’s have a look at the description of this character in the relevant PL file, that is, the human-readable form of a TFM file:

Recall that you can obtain a PL file corresponding to the cmmi10.tfm file with the command

This should automatically pick up the TFM file from the TEXMF tree, and save the PL file in the current directory. What we show above is in fact an excerpt of a PL file obtained in this way; for our convenience, the tftopl program adds to the description of every character a COMMENT list that summarizes the kerning pairs (and also the ligatures, if there were any) having that character as their first element (kerning and ligatures are actually defined above, in the LIGTABLE list). We can see that negative kerning of decreasing amount are prescribed for the f, the j, and the Z character, and that there is even a character (Y) for which a positive kerning is specified; all other letters receive normal spacing. We can also see that the italic correction for d is zero, since no CHARIC field is present.

Barbara Beeton’s answer explain the reason for this deliberate design choice of the Author of the font.

How to suppress the kerning

I’d like to add a few remarks to Ulrike Fischer’s smart answer:

For example, the following works for pdfTeX:

Finally, I’d like to remark that, in order to avoid confusion, it is perhaps better to write $d\,x$ when the intended meaning is “d times x”; and this, independently of the math font in use!

Not the answer you're looking for? Browse other questions tagged math-mode kerning computer-modern or ask your own question.