I use ConTeXt and Lucida OTF fonts, and I would like to adjust the kerning in math between the prime and the left parenthesis. Let us look at this example:

The output with a new version of ConTeXt MKIV is the following: 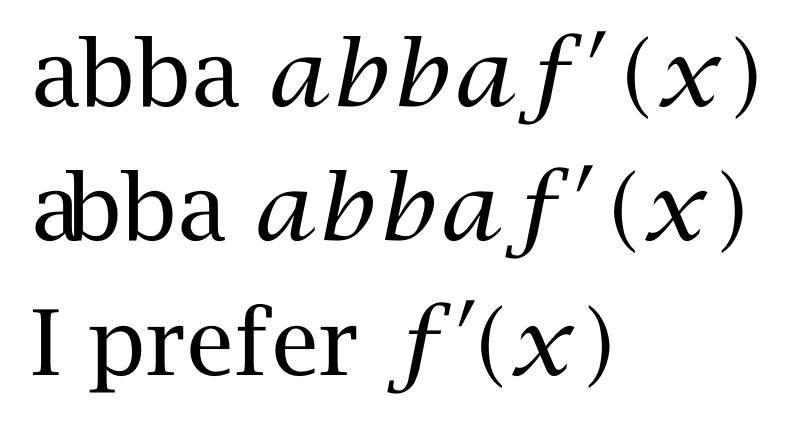 As you can see I am able (after reading on pages 178 and 179 of this font manual) to adjust the kerning between the characters a and b, if in text, but not in math. Also, and more important, the spacing between the prime and the left parenthesis is unchanged (I admit that my approach was a bit naive).

Question I there a way, without messing things up, to change the kerning between prime and left parenthesis in math mode automatically through the whole document?

You might assume that I never use constructions like f'\left( or f'\bigl( or similar, but of course it is extra good if the solution also works for them. Just to emphasize, I work in ConTeXt, so I am looking for a solution that works in ConTeXt. Probably the solution will be lua based, and then there is of course the bonus that it will also work in lualatex.

Additional question This is probably opinion based, so I prefer if we focus on the first question. Could this issue perhaps be considered as a bug in the Lucida OpenType font?

I have tried some other open type fonts, both with lualatex and ConTeXt, and many of them have, in my opinion, non-optimal space between the prime and the parenthesis. Still, I imagine this is not an engine (luaotfload?) problem, but something that could/should be fixed in the fonts.

Scroll down to the update of July 31st, the issue is now considered to be solved.

I have now got some replies from the mailing list thread. There is something called "goodies" to adjust details in open type math fonts. For lucida, there is a file called lucida-opentype-math.lfg that can be edited.

In the goodie files one can set things like kerning for a character, kerning pairs (which I only got working for characters like a and b and not for prime and parenthesis) and width and offset of characters. Since I did not succeed in setting kerning pairs completely, I will use the last option for now.

In my lucida-opentype-math.lfg I changed the dimensions variable to the following (and also saved the file in the same folder as I have my tex file for the moment):

I don't know about others, but to me this looks better than the output shown in the question (it might still have to be tuned).

A possible drawback with this solution is that the prime(s) might "collide" with some other characters, but in the current document I work on, this does not seem to be the case.

This method does not work anymore. Hans did change the way that primes are handled in LuaTeX 1.05, and the output (with that modified lucida-opentype-math.lfg) looks like this (i.e. nothing changes):

My guess is that still one could solve this with the goodie file lucida-opentype-math.lfg, but I do not know how.

The issue is now solved, thanks to Hans Hagen's help on the mailing list. When introducing the new mechanism for primes, their unicode slots got remapped (I don't understand the details). Thus, I have now added the following lines in my lucida-opentype-math.lfg:

Below is the example from above with these settings.

1) The values above are the values I got by testing myself. I will write an email to the ConTeXt mailing list to suggest them (or other similar values) to be added to the font goodie file. If we are lucky, they will be inserted into the distribution.

2) It does not seem possible to use the parameter kernpairs to just change the kerning between the primes and the left parenthesis. I guess that the reason is that those symbols are kind of special.

Not really an answer but too long for a comment. In LaTeX kerning works with the math fonts (I don't have lucida so I used latin moderm math). But you should be aware that math typesetting is two dimensional. Not every spacing can be handled as kerning between two adjacent glyph. 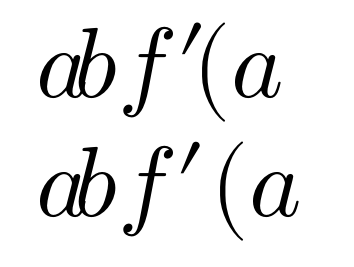 As one can see there is a difference between the input with \prime and an apostroph. The reason why the second doesn't kern can be seen in the log. When the apostroph is used then the glyph are from two different fonts (7pt and 10pt):

When \prime is used both are from the 10pt font:

When you use \biggl( instead of a simple parenthese than you get in the log-file a complicated construction consisting of various hbox: kerning with the prime is out of question here.

Not the answer you're looking for? Browse other questions tagged context kerning or ask your own question.

30
An example of changing kerning of a font in LuaLaTeX
7
Find optimal kerning for space between inline math and text
16
Restore kerning across empty groups
25
Differences regarding kerning and ligaturing when using the MacTex2013 and MacTeX2014 versions of LuaLaTeX with .ttc fonts
3
Change kerning for `f'` in math mode
4
How to fix side-bearing (e.g. add extra side-bearing) for a single character?
12
LuaLaTeX: Change kerning around “1” to simulate proportional figures
10
Context : How to install and use new opentype (math) fonts?
1
Proper kerning of \{f\} \sigma_0 in TeX Gyre Termes Math