I would like to do something similar to the (first) answer to this question, i.e. the MWE given by: 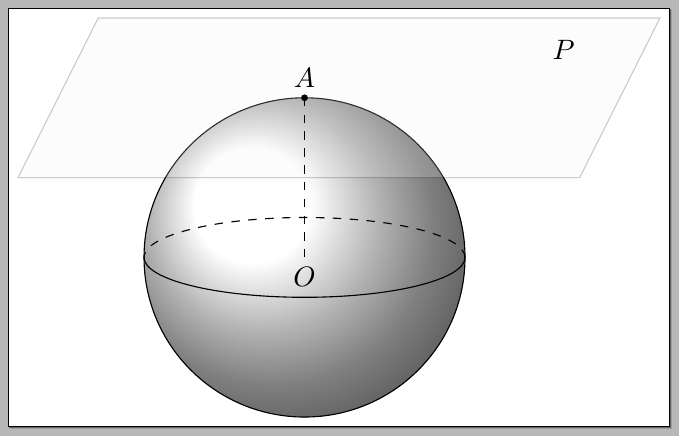 What I would like, however, is to give a comparison between a rotation about e.g. the y-axis of e.g. 60 degrees and the corresponding translation in the tangent plane to A. In other words, I would like to draw a path on the surface of the sphere from A (i.e. the north pole (0,0,1)) to the point (sin(60),0,cos(60)). Moreover, I would like to draw a path in the tangent plane of the same length lying "above" the previous path, i.e. a straight-line path from A to (pi/3,0,1).

My goal is to have an image allowing one to make a comparison between such rotations and the translations sitting "above" them, and how these get closer together as the radius of the sphere gets larger (for the purposes of clearly, explicitly illustrating a simple example of group contractions).

Unfortunately, my unfamiliarity with TikZ has left my attempts at adapting the linked figure for my purposes unfruitful. Any suggestions on a simple way to do something like this?

Hope this gets you started.

I take inspiration from the official pgfplots sphere 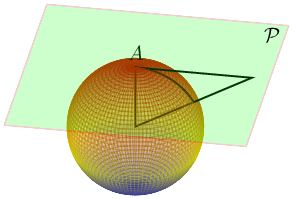 9
How to get a tangent coordinate system for the decoration of a path?
7
Connecting an arced path in TikZ
5
The intersection of a sphere with planes through an axis tangent to the north pole
18
TikZ: Drawing an arc from an intersection to an intersection
9
Line up nested tikz enviroments or how to get rid of them
8
Drawing an arc between 2 nodes with a specific radius
1
Plane intersecting sphere with tikz and tikz-3d
2
tikz tangent arc between two circles
1
How do I change the radius of circle in a node in tikz style?
2
Drawing a sphere in Tikz using 3d library