Set music in LaTeX with ABC or LilyPond?

I’ll give a tutorial, “LaTeX for musicians”, in the next year and certainly I want the to show how to include music in their texts. I’m a musician myself but I never used LaTeX to typeset music.

I found two ways to include music in a LaTeX document (plus: integrate music as image) and I want to share my thoughts and ask for some help (see below). First, let's take a more detailed look at both ways:

Now let’s talk about the pros and cons.

The numbers are not to give an order. I numbered the questions to make it easy to answer the …

I’d prefer to use (and teach) the LilyPond way but I fear the compilation workflow would scare the students. So if question 2 could be solved it would be great :-)

I hope you understand what I want since my english may be not the best. Please ask if something is not clear …

It's not possible to use the same font as the document with ABC, for inherent limitations of the abcm2ps program. However, it's quite a long time since I don't update it and things might have changed (I'll take a look).

It should be easy to add "inline" versions of the music snippet inclusion, which is not there because the package was intended for inclusion of complete tunes.

Integration with LilyPond in the same way is not as easy. I have some "kind-of-working" code. A major hindrance is the difficulty of passing LilyPond parameters and directives from the TeX side (with lilypond-book it's the other way around).

Since there seems to be interest in this topic, I'll try and develop the code. For now, the following code

will produce the following output: 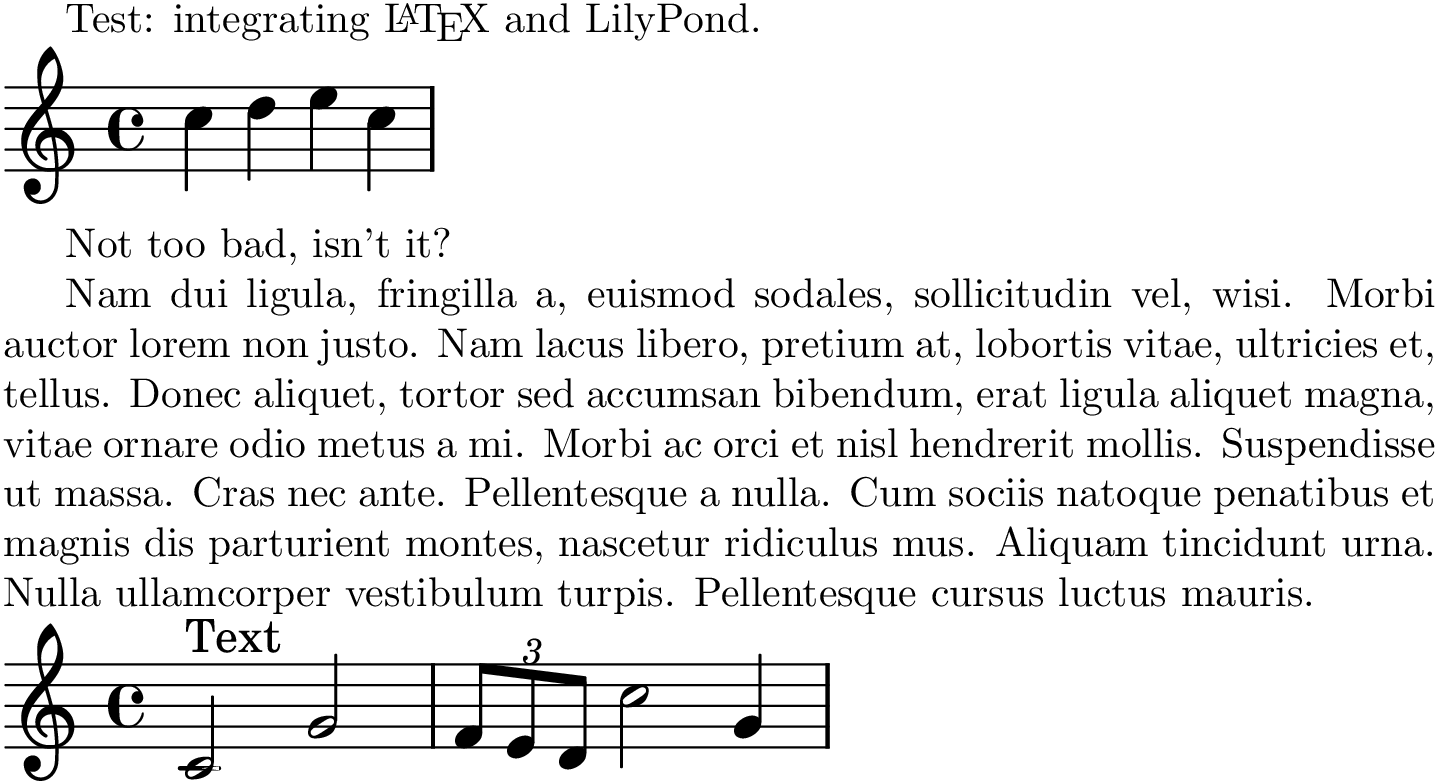 LyX may be an good for this purpose and the audience you mention. From the LyX Wiki:

Support for LilyPond-Book
LyX now supports LilyPond music notation with the lilypond-book module, by direct entry of LilyPond markup in LyX's window and processing through lilypond-book→(pdf)latex. In combination with the new preview inset, you can view the score directly in the LyX window. For more information see LyX's example file lilypond.lyx.

Not the answer you're looking for? Browse other questions tagged music lilypond or ask your own question.

56
Can I create music sheets with LaTeX?
11
How to run LaTeX and lilypond-book in one command?

4
lualatex and lilypond/music notation
6
Lilypond generated with MuseScore does not fit the width of the page in XeTeX doc
4
How to easily include .ly files in a .tex document?
3
How to make a lilypond snippet fully justified (according to surrounding text)?
1
Retaining forward/inverse search when using Lilypond in Texstudio
11
ebgaramond swashy Q, LaTeX vs. Lilypond
1
Integrating LaTeX with Lilypond
2
How to produce multistave music using abc notation in a document?